an instrument for observing the relationship between two or more parameters or functions, which can be electrical or convertible into electrical impulses. The electrical signals that represent the parameter or function are fed to two mutually perpendicular pairs of deflection plates in a cathode-ray tube. The cathode ray produces a graphic image—an oscillogram—on the tube’s screen that can be observed, measured, and photographed. An oscillogram usually depicts the shape of an electrical signal with respect to time. From it can be determined the polarity, amplitude, and duration of the signal.

An oscillograph is frequently calibrated in volts on the vertical scale of the tube’s screen and in seconds on the horizontal scale. Thus, the amplitude and temporal characteristics of an entire signal or parts of a signal can be simultaneously measured and observed, as well as the parameters of random signals or signals that appear only once and are not prolonged. In some apparatus, the image of the signal under study is compared with that of a calibrating signal or the balanced method of measurement is used (seeBALANCED METHOD). 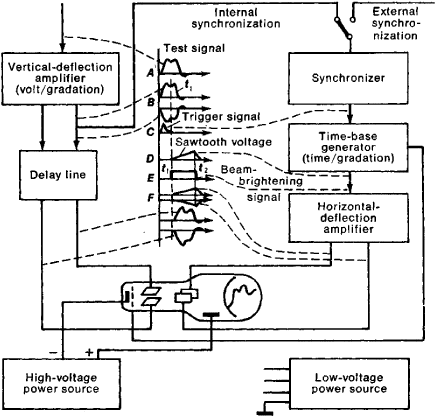 Figure 1 is a simplified diagram of an oscillograph circuit. The signal under study, A, is fed to the input amplifier for vertical deflection, which has an adjustable gain and is designed to make the magnitude of the beam deflection correspond to the magnitude of the input signal. The beam is moved horizontally by a time-base generator that produces a sawtooth voltage, D, which varies linearly with time. The sawtooth voltage is fed to the input of the horizontal-deflection amplifier, which in turn feeds its output voltage, F, to the horizontal-deflection plates of the tube. The electron beam is moved horizontally at a constant rate, thus creating the linear time base. The sweep rate is adjustable.

In order to project on the tube’s screen a stable image of the signal under study, every new sweep must begin at the same phase of the signal. This is achieved by passing the signal from the vertical amplifier to a synchronizer that forms a trigger pulse, C, for the time base at a selected point in the signal. In order that the electron beam may be visible only while it is sweeping forward, that is, when t2—t1 > 0, the time base produces a pulse, E, to brighten the beam that is fed to the tube’s control grid, which acts as a modulator. The pulse is a square wave with positive polarity and a duration equal to that of the forward sweep of the beam. Since the signal under study triggers the time base, and since the synchronizer and time base do not respond instantly but with a delay of fractions of a microsecond, a delay line must be introduced in the vertical-deflection channel in order that the initial part of the signal be observed.

The delay line compensates for the operating times of the synchronizer and the time base, since these times are slightly shorter than the time delay of the signal. In the absence of a delay line, only that part of the signal (represented in Figure 1 by curve B) that appears after time t\ is visible on the tube’s screen. An oscillograph also includes high-voltage and low-voltage power supplies. The former only supplies the tube, while the latter supplies the electronic circuit of the other components and sub-units of the apparatus.

The important specifications of an oscillograph that determine its possible uses are (1) the deflection sensitivity, which is the ratio of the input-signal voltage to the beam deflection that is produced by the voltage and which is measured in volts (V) per cm or V per gradation; (2) the passband, which is the frequency range in which the deflection sensitivity drops no more than 3 decibels (dB) from its value at the middle, or reference, frequency; (3) the rise time, τr, during which the transient response of the oscillograph rises from 10 percent to 90 percent of the amplitude value, which is often used instead of the passband; the upper-boundary frequency fu of the passband is related to τr by the equation fu = 0.35/TR where fu is measured in megahertz (mHz) and τr in nanoseconds (nsec); (4) the deflection factor, which is the ratio of the time τr to the amount of beam deflection produced by the time-base voltage during τr, expressed in sec per cm or sec per gradation; and (5) the writing speed, which is the maximum speed at which the beam can move on the screen and still guarantee that a one-time signal will be photographed or—in storage oscillographs—retained. These specifications determine the amplitude, duration, and frequency ranges of the signals to be studied.

The degree of error in measurement of signals depends on the degrees of error in the deflection sensitivity and the deflection factor, which are usually about 2 to 5 percent. It also depends on the frequency and duration of the signal under study, on the passband, and on the rise time, Tr, of the signal. Signal parameters that are greater than or equal to 5 Tr can be reproduced on oscillograph screens with an error equal to or falling short of 2 percent.

The most widely applicable oscillograph is one with interchangeable units for vertical and horizontal deflection. By rearranging the units it is possible to design several types of oscillographs, including wide-band, high-sensitivity, two- or four-channel, and differential ones. Depending on its circuit features, an oscillograph can be all-purpose, storage, sampling, high-speed, or specialized (see Table 1). The oscillograph on which Figure 1 is based is an all-purpose type.

Storage oscillographs have charge-storage tubes. They retain an image of a signal for a long time and are therefore useful in studying one-time and infrequently repeated signals. The writing speed of storage oscillographs attains several thousand km per sec. The playback time of a recorded image ranges from 1 to 30 minutes for various models. As a rule, these oscillographs are able to store an image over a span of several days, even when the apparatus has been turned off during that time. The block diagram of a storage oscillograph differs from Figure 1 in having an extra unit that controls the operations of the storage tube, including writing, image-reproduction, and image irradication.

input signal, whose shape it reproduces. The duration of the transformed signal is many times longer than that of the original, and therefore the original spectrum is compressed; this is equivalent to a corresponding broadening of the passband. A sampling oscillograph has the widest bandwidth and accommodates periodic signals with a duration of about 10–11 secs.