Eurasian thistlelike herb (Carthamus tinctorius) of the family Asteraceae (asteraster
[Gr.,=star], common name for the Asteraceae (Compositae), the aster family, in North America, name for plants of the genus Aster, sometimes called wild asters, and for a related plant more correctly called China aster (Callistephus chinensis
..... Click the link for more information.  family). Safflower, or false saffron, has long been cultivated in S Asia and Egypt for food and medicine and as a costly but inferior substitute for the true saffronsaffron,
name for a fall-flowering plant (Crocus sativus) of the family Iridaceae (iris family) and also for a dye obtained therefrom. The plant is native to Asia Minor, where for centuries it has been cultivated for its aromatic orange-yellow stigmas (see pistil).
..... Click the link for more information.  dye. In the United States, where it is sometimes called American saffron, it is more important as the source of safflower oil, which has recently come into wide use as a cooking oil. Safflower is classified in the division MagnoliophytaMagnoliophyta
, division of the plant kingdom consisting of those organisms commonly called the flowering plants, or angiosperms. The angiosperms have leaves, stems, and roots, and vascular, or conducting, tissue (xylem and phloem).
..... Click the link for more information. , class Magnoliopsida, order Asterales, family Asteraceae. 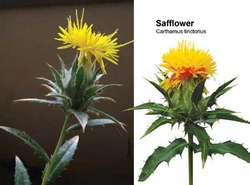 Dried flowers are used as a less expensive substitute for saffron. Safflower is extremely effective in lowering cholesterol levels. Laxative effect helps bowel movements. Encourages menstruation and treats abdominal pains. Helps skin heal open wounds and bruises. Used for all kinds of skin disorders like rashes, measles. Tea used for hysteria, panic attacks, fevers, mucus. Yellow, orange or red globular flowers, one to five per branch. Each flower contains 15-20 seeds, which are the source of the famous safflower oil (flavorless and colorless, like sunflower oil) Safflower seeds can be used in bird feeders instead of sunflower seeds because squirrels don’t like them. Safflower oil is also used as a medium for oil paints. If you want to use natural pigments and dyes, mix them with safflower oil to paint.