Osiris (ōsīˈrĭs), in Egyptian religion, legendary ruler of predynastic Egypt and god of the underworld. He was the son of the sky goddess Nut and the earth god Geb. The great benefactor of mankind, Osiris brought to the people knowledge of agriculture and civilization. In a famous myth he was treacherously slain by his evil brother Set, who cut his body into 14 pieces and spread the fragments throughout Egypt. Thereupon, Isis, sister and wife of Osiris, sought and found his scattered body. She buried the pieces, making each burial place a sacred spot. According to another legend Isis did not bury Osiris, but collected the pieces of her dead husband and miraculously brought him back to life. Osiris' son Horus later killed Set and became the new king of Egypt, while Osiris became ruler and judge of the underworld. The worship of Osiris, like that of the sun god Ra, was one of the great cults of ancient Egypt. It gradually spread throughout the Mediterranean world and, with that of Isis and Horus, was especially vital during the time of the Roman Empire. Identified variously with the waters of the Nile, the grain of the earth, the moon, and the sun, Osiris was the great symbol of the creative forces of nature and the imperishability of life. He was commonly represented as swathed in mummy wrappings, wearing the crown of Upper Egypt (a dome-shaped hat with a papyrus tuft) and holding a whip and a crook. 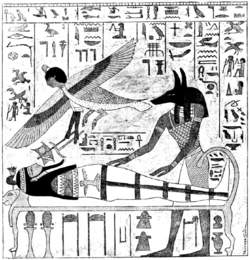 Feedback
Flashcards & Bookmarks ?
Please log in or register to use Flashcards and Bookmarks. You can also log in with
Flashcards ?
My bookmarks ?
+ Add current page to bookmarks
Mentioned in ?
References in periodicals archive ?
In the second-step merger, each share of Osiris common stock that was not purchased by Smith & Nephew in the tender offer (other than shares directly owned by the Subsidiary or by any subsidiary of Osiris) has been converted into the right to receive $19.00 per share in cash, without interest, subject to any required withholding of taxes, which is the same cash price per share as was paid in the tender offer.
Osiris Acquisition By Smith & Nephew Plc Closes
Osiris delivered revenue of USD 142.8m for the year ended 31 December 2018, a 20.5% increase over the prior year.
Smith and Nephew Closes Acquisition of Osiris Therapeutics
Scrolls such as Nany's were rolled up (papyrus is too brittle to be folded) and placed inside a hollow wooden figure of Osiris, the ancient Egyptian god of the underworld and rebirth.
A&A Art Print: Respond and Connect: Book of the Dead for the Singer of Amun, Nancy, c. 1050 BCE. Egyptian
"Debrabandere has been a transformational leader for Osiris," said Peter Friedli, board chairman.
CEO of Osiris therapeutics resigns
Prior to joining Osiris, he served as a commercial executive for venture-backed organizations in the trauma and spine markets.
Promotions given to two Osiris executives
After the death of Osiris, Isis propagated the doctrine of the survival of Osiris as a sprit being.
Letter from America: From Christ to Christmas - a historical analysis - Part 2
Rosetta's camera OSIRIS has been doing a great job at catching ever clearer glimpses of its similarly sized destination.
Rosetta's target comet has a double nucleus
This will allow us to operate further offshore, increase the number of days we can be operational at sea, and see Osiris Projects becoming a much stronger competitor in both the oil and gas and renewables markets.'
Osiris gets funding from Santander
Osiris Projects managing director Andy McLeay said: "We have seen strong demand for our services and the company is looking to expand its operations, particularly into offshore mapping via the chartering of larger vessels.
BANK DEAL HELPS SURVEY FIRM GROW; PS4.8m boost for specialist seabed mapping group
"Our focus on execution has driven us to this strong start to 2014," said Lode Debrabandere, PhD, Osiris President and Chief Executive Officer.
Osiris reports revenue up 25%, gross margin improved from 73% to 78% in first quarter of 2014
1-17), reminds the reader that the Osiris of this period is primarily the product of a reading of the Khoiak Festival texts and Plutarch's reconstruction of the myth.
Le culte d'osiris au [l.sup.er] millenaire av. j.-c.: decouverts et travaux rercents
[ClickPress, Thu Aug 01 2013] Global Market Direct's pharmaceuticals report, "Osiris Therapeutics, Inc.
Market Report, "Osiris Therapeutics, Inc. - Product Pipeline Review - 2013", published