A wall area directly above a doorway containing a panel ornamented with carvings or figures. 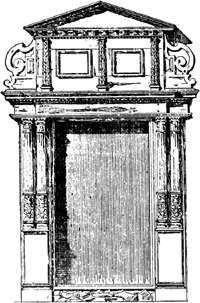 Feedback
Flashcards & Bookmarks ?
Please log in or register to use Flashcards and Bookmarks. You can also log in with
Flashcards ?
My bookmarks ?
+ Add current page to bookmarks
Mentioned in ?
References in periodicals archive ?
In the former, an overbearing clothes press (1764-66) designed by Robert Adam with exquisite carvings by Sefferin Alken dominates one end, while the three-dimensional vigour of Grinling Gibbons' carving is exemplified by some overdoor decorations (c.
Substance over style: the Dr Susan Weber Gallery at London's Victoria and Albert Museum is, perhaps surprisingly, the institution's first dedicated furniture gallery. Rather than following a chronological arrangement, its inspired display juxtaposes pieces from different periods and parts of the world, providing insight into a rich array of manufacturing techniques
An overdoor hanger creates extra space for towels - and a laundry bag sewn from spare fabric - without having to drill holes.
SMALL ON SPACE BUT STILL Big on style; TURN A POKY BATHROOM INTO A DREAM.. WITH BAGS OF STORAGE
This is also suggested by the fact that in Symonds's 1652 list, Van Dyck's oblong format half-length portrait of Northumberland as Lord High Admiral, with an anchor (Collection of the Duke of Northumberland, Alnwick Castle)--clearly intended as an overdoor or overmantel (16)--is placed between the two Van Dyck group portraits now at Petworth (Northumberland and his family [no.
'Reining toasts': portraits of beauties by Van Dyck and Dahl at Petworth
(44) This can be seen, for example, in the set of overdoors in the Kaisersaal.
The minuet: painter-musicians in triple time
In 1753-54, for example, Carle van Loo painted two overdoors for the bedchamber of Madame de Pompadour at the chateau de Bellevue in which his client is shown arrayed as a sultana.
Turning Turk: Robert O'Byrne assesses two publications dealing with the impact of the Orient on Western taste
Opposite Falconet's statue, two overdoors attributed to Francois Boucher represent Cupid reformed for the time being and practising the arts of writing verse and painting pictures.
Cupid at the Hermitage
Since she is painted frontally, Nattier does not render her high-arched nose, although that feature is prominent in Vanloo's portraits of her as three sultanas, two of them conversing over their needlework (Hermitage Museum), painted in 1752 as overdoors for the Turkish Bedroom of her Chateau de Bellevue.
The marquise de Pompadour visits London
Two Lely portraits, which were originally placed as overdoors on this wall, have generously been lent from Newport, Rhode Island, and New York.
Hall of fame: the temporary return of Sir Robert Walpole's outstanding picture collection to Houghton Hall has posed unique challenges to exhibition organisers. The process of securing loans and reconstructing Walpole's hang has given rise to numerous surprises
They also wasted his time and talent by commissioning, for overdoors and other decorations, so-called allegories similar to Largilli[greave{e}]re's All[acute{e}]gorie de la Musique, with which he had dignified but not e nhanced still-life.
CHARDIN AT THE ROYAL ACADEMY
These were developed by Carlos IV, who continued to employ his father's court artist, Anton Raphael Mengs, whose beautiful Dawn and Dusk overdoors in the exhibition, reveal the influence of Boucher.
Throned in platinum: politically they were a disaster but a spectacular exhibition in Madrid makes plain that Carlos IV and Queen Maria Luisa were superb patrons of art
Because they were resistant to weathering, many Della Robbia reliefs can still be found as sculpture inserted into an architectural context, such as overdoors, represented here by a particularly fine lunette of St Brigid of Sweden flanked by two confraternity members (Fig.
Masters of majolica: a remarkably beautiful exhibition in Arezzo sets the achievements of the Della Robbias in their artistic context
The paintings had been inserted into the wainscot, the landscapes as overdoors and the View of Rubens's House as an overmantel.
Rubens's house revealed: the oldest known depiction of Rubens's house in Antwerp has recently been discovered in the Buckinghamshire County Museum. Ben van Beneden discusses the significance of this remarkable canvas