1. Architect a support projecting from the side of a wall or other structure
2. a general name for parenthesis, square bracket and brace (sense 6)
3. the distance between two preliminary shots of artillery fire in range-finding
4. a skating figure consisting of two arcs meeting at a point, tracing the shape ⋎
Collins Discovery Encyclopedia, 1st edition © HarperCollins Publishers 2005

[′brak·ət]
(building construction)
A vertical board to support the tread of a stair.
(civil engineering)
A projecting support.
(ordnance)
The distance between two strikes or series of strikes, one of which is over the target and the other short of it, or one of which is to the right and the other to the left of the target.
A group of shots (or bombs) which fall both over and short of the target.
McGraw-Hill Dictionary of Scientific & Technical Terms, 6E, Copyright © 2003 by The McGraw-Hill Companies, Inc. 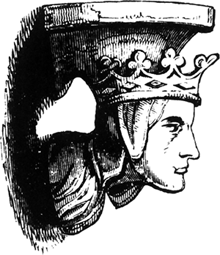 bracket, 1
1. Any overhanging member projecting from a wall or other body to support a weight (such as a cornice) acting outside the wall.
2. A knee brace which connects a post or batter brace to an overhead strut.
3. A projecting electrical wall fitting.
4. A short board attached to the carrying member on the underside of a stair supporting the tread.
5. A decorative detail attached to the spring of a stair under the overhanging edge of the treads. Also see eaves bracket, stair bracket, step bracket, wall bracket.
McGraw-Hill Dictionary of Architecture and Construction. Copyright © 2003 by McGraw-Hill Companies, Inc.

Often used loosely for parentheses, square brackets, braces, angle brackets, or any other kind of unequal paired delimiters.
This article is provided by FOLDOC - Free Online Dictionary of Computing (foldoc.org)

In programming, brackets (the [ and ] characters) are used to enclose numbers and subscripts. For example, in the C statement int menustart [4] = {2,9,15,22}; the [4] indicates the number of elements in the array, and the contents are enclosed in curly braces. In the C expression, if (ABCbuff [501] == '\x1'), the [501] indicates the 501st byte of the ABC buffer (starting with 0). See also bracketing.
Copyright © 1981-2019 by The Computer Language Company Inc. All Rights reserved. THIS DEFINITION IS FOR PERSONAL USE ONLY. All other reproduction is strictly prohibited without permission from the publisher.

Feedback
Flashcards & Bookmarks ?
Please log in or register to use Flashcards and Bookmarks. You can also log in with
Flashcards ?
My bookmarks ?
+ Add current page to bookmarks
Mentioned in ?
References in periodicals archive ?
a paren Expla money Make c has gon If you chores, way.
KIDS: Ground rules for a happy home