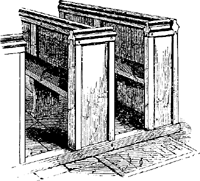 pew
In a house of worship, one of a number of fixed benches with backs; also See box pew.

Feedback
Flashcards & Bookmarks ?
Please log in or register to use Flashcards and Bookmarks. You can also log in with
Flashcards ?
My bookmarks ?
+ Add current page to bookmarks
TheFreeDictionary presents:
Write what you mean clearly and correctly.
Mentioned in ?
References in classic literature ?
"Poor Janey!" he thought, looking at his sister, "even by screwing her head around she can see only the people in the few front pews; and they're mostly dowdy Newlands and Dagonets."
Archer's eyes lingered a moment on the left-hand pew, where his mother, who had entered the church on Mr.
View in context
And now all faces were visible, for all were standing up--the little children on the seats peeping over the edge of the grey pews, while good Bishop Ken's evening hymn was being sung to one of those lively psalm-tunes which died out with the last generation of rectors and choral parish clerks.
View in context
While these aged mourners were passing up the aisle, it was observed that, from pew to pew, the spectators shuddered with irrepressible awe, as some object, hitherto concealed by the intervening figures, came full in sight.
View in context
With that he walked softly out of his pew and into his mother's, and as Mr Swiveller would have observed if he had been present, 'collared' the baby without speaking a word.
View in context
"Budge, you skulk!" cried Pew. "Dirk was a fool and a coward from the first--you wouldn't mind him.
View in context
Casaubon came out of the vestry, and, entering the pew, seated himself in face of Dorothea, Will felt his paralysis more complete.
View in context
Lynde was too far away--to show me your pew. I sat just as still as I could and the text was Revelations, third chapter, second and third verses.
View in context
Her only salvation was trying to fix her attention upon Uncle Mac a portly, placid gentleman, who seemed entirely unconscious of the iniquities of the Clan, and dozed peacefully in his pew corner.
View in context
You say that there was a gentleman in the pew. Some of the general public were present, then?"
View in context
The clear sunshine streamed so warmly through the window into the pew where Karen sat!
View in context
Therefore I could patch up nothing, and it was too extreme an effort to squeeze beside him into the pew: he would be so much more sure than ever to pass his arm into mine and make me sit there for an hour in close, silent contact with his commentary on our talk.
View in context