Electronics a circuit that cuts off the audio-frequency amplifier of a radio receiver in the absence of an input signal, in order to suppress background noise
Collins Discovery Encyclopedia, 1st edition © HarperCollins Publishers 2005

[skwelch]
(electronics)
To automatically quiet a receiver by reducing its gain in response to a specified characteristic of the input.
McGraw-Hill Dictionary of Scientific & Technical Terms, 6E, Copyright © 2003 by The McGraw-Hill Companies, Inc. 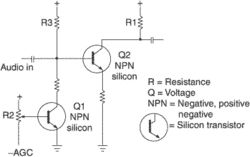 A simple squelch circuit.
A circuit in a radio receiver that keeps the volume down when no signal is being received, but the volume builds up as soon as a signal is received. The function of a squelch is to adjust the sensitivity of the receiver by eliminating unwanted weak signals that cause background noise such as static, hash, or hiss. Most squelch controls are automatic, but there are a few manual squelch controls, too. Squelch circuits are used in communications equipment, which have long periods of silence between transmissions.
An Illustrated Dictionary of Aviation Copyright © 2005 by The McGraw-Hill Companies, Inc. All rights reserved