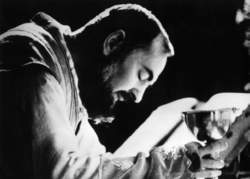 Many miracles are associated with the Capuchin monk Padre Pio, who was said to have experienced the stigmata (seen here in this photo) after having a vision of Jesus. He later managed a hospital in Italy for many years, where healing miracles were attributed to him. Getty Images.

Padre Pio, a modern saint and miracle worker, was born Francesco Forgione on May 25, 1887, at Pietrelcina, Benevento, in southern Italy. Raised in relative poverty, he had a mystical bent. He was only fifteen when he became affiliated with the Capuchin Order, and he was made a full member four years later. He was ordained on August 10, 1910.

That he was truly an unusual person first became evident to his monastic brothers in 1918, when on September 20 Padre Pio had a vision of Jesus and received the STIGMATA on his hands and feet. Word spread through the order and in the surrounding community over the next months, and it was picked up in newspapers the following year. As a following developed across the country, in 1923 the Catholic Church made an initial assessment that the stigmata were not of supernatural origin. That ruling did little to stop the development of a following. Pio organized several social service projects, and people began to form prayer groups that supported the charitable efforts. The groups drawn to Padre Pio were pushed to the fringe of the Catholic Church, which officially denied the veracity of any of the unusual events reported in the monk’s life. At various times he was forbidden to hold public masses.

Knowledge of Padre Pio remained somewhat confined until World War II, when American soldiers discovered him. It was also in the 1940s that a young Polish priest, Karol Wojtyla (the future Pope John Paul II), first visited him. However, after the war, Padre Pio turned his attention not to his increasing following, but to his several social projects, especially a hospital that was built near the monastery where he resided, San Giovanni Rotundo. Through the rest of his life he would manage the hospital, the House for the Relief of Suffering, spending much of his free time listening to confessions from the growing number of pilgrims. Stories circulated of a spectrum of paranormal occurrences, ranging from BI-LOCATIONS to miraculous HEALINGS. Among the better documented cases of the latter involved seven-year-old Matteo Pio Colella, the son of one of the hospital’s physicians. He was cured of meningitis in 2000 after being abandoned by his doctors, who concluded that he would soon die. He recovered quickly following a prayer vigil on his behalf. Matteo later said that he had seen an elderly man with a white beard wearing a brown monastic habit.

Padre Pio died on September 23, 1968, and immediately a popular demand for his canonization arose. The effort on his behalf succeeded inthe 1990s, when Pope John Paul II oversaw the ceremonies at which Padre Pio was named venerable (1997), was beatified (1999), and finally canonized (2002). In recent years, the amount of popular literature on Pio has grown exponentially. The places associated with him at San Giobnani Rotundo have become pilgrimage sites, and he is honored globally through organizations such as the Padre Pio Foundation.

Feedback
Flashcards & Bookmarks ?
Please log in or register to use Flashcards and Bookmarks. You can also log in with
Flashcards ?
My bookmarks ?
+ Add current page to bookmarks
Mentioned in ?
References in periodicals archive ?
THE FACE of Italian monk Padre Pio has appeared on a wall in a town in Tyrone.
Saint's face 'appears' in an Irish wall
Now details of her case have been handed to the Pope as part of a campaign to have Padre Pio canonised.
SHE'S A MIRACLE; Pope is told how a dead priest saved girl's life
I come to Saint Padre Pio and pray for all of you asking me for help.
Pokwang says she can't give financial help to all those who message her
One of the main faith tourism attractions in Batangas that recently drew thousands of devotees is the National Shrine of Saint Padre Pio. It was among the churches that housed the 'incorrupt heart' relic of Saint Padre Pio of Pietrelcina, Italy, when it arrived in the country in October 2018 as part of an organized worldwide tour.
Pedal and pray with Lima Park Hotel's 6th Bisikleta Iglesia
it's around 4 million to 5 million," Father Joselin Gonda, rector of the National Shrine of Padre Pio, said in an interview before the farewell Mass.
PH had largest number of devotees to heart relic of Saint Padre Pio
Rebolledo, a veteran cake decorator and visual artist, will showcase about 20 paintings inspired by his devotion to the canonized Capuchin saint, Padre Pio.
Mira exhibit for a cause depicts Padre Pio, Mother Teresa, spiritual themes
Ma Theresa Collantes noted that since the establishment of its parish last June 28, 2003, countless of devotees and parishioners visit the shrine to attend mass for special prayer and healing through the intercession of Saint Padre Pio.
Bill filed to declare National Shrine of Saint Padre Pio a tourist destination
This year's cycle also marked the first-time visits to the National Shrine of Saint Padre Pio and the church of Saint Francis of Paola of the Order of Minims.
Biker pilgrims complete Bisikleta Iglesia cycle 6
The church hosted the only public veneration in Illinois of six relics of Saint Padre Pio, an Italian priest who died in 1968.
Relics in town, miracle recalled Relics: Man's cancer vanished after visit with Padre Pio
22nd the eve of the Feast of Padre Pio. Yes we were blessed to see the great Saint whom we felt was merely asleep.
The 1st list of Cebuano political candidates