A mode of building following strict Roman forms, particularly popular in England, as set forth in the publications of Italian Renaissance architect Andrea Palladio (1508–1580).
Illustrated Dictionary of Architecture Copyright © 2012, 2002, 1998 by The McGraw-Hill Companies, Inc. All rights reserved
The following article is from The Great Soviet Encyclopedia (1979). It might be outdated or ideologically biased.

a style in 17th- and 18th-century European architecture that developed, within the limits of classicism, the principles established by Palladio. Architects opposed to the affected character and irrationality of the baroque were greatly attracted to the palaces, churches, and villas designed by Palladio, which were characterized by symmetrical planning combined with an extremely varied use of compositional devices and elements from the classical orders. Palladio’s treatise The Four Books of Architecture (1570) was crucial to the spread of his ideas.

V. Scamozzi, who completed some of Palladio’s projects, is considered the first representative of Palladianism. In the 17th century the style was most widespread in the architecture of England (I. Jones) and Holland (J. van Campen). Palladianism enjoyed the height of its popularity in the 18th century, at which time English and German representatives of the style designed buildings, mostly suburban villas, distinguished by elegant yet simple ornament, functional and comfortable layout, and thorough integration with the surroundings (landscape parks). Among the English Palladian architects were Lord Burlington, W. Kent, K. Campbell, J. Paine, and W. Chambers; German representatives included G. W. von Knobelsdorff and F. W. F. von Erdmannsdorf.

Palladianism appeared in Russia in the 1780’s and 1790’s. Most works in the style are distinguished by a certain intimacy and elegant simplicity. Elements of Palladianism characterize the work of C. Cameron, G. Quarenghi, and N. A. L’vov. 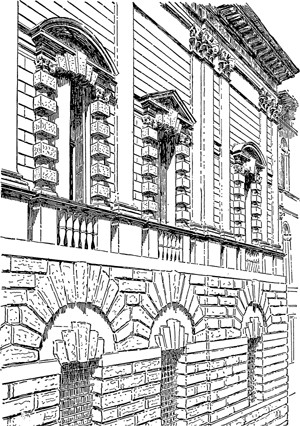 Palladianism
A term descriptive of a style of building that follows the strict use of Roman forms, as set forth in the publications of the Italian Renaissance architect Andrea Palladio (1508–1580), particularly under the influence of Lord Burlington in the 18th century.
McGraw-Hill Dictionary of Architecture and Construction. Copyright © 2003 by McGraw-Hill Companies, Inc.

Feedback
Flashcards & Bookmarks ?
Please log in or register to use Flashcards and Bookmarks. You can also log in with
Flashcards ?
My bookmarks ?
+ Add current page to bookmarks
Mentioned in ?
References in periodicals archive ?
About Burlington and the revival of classical European and Renaissance Italian art in England in the first half of the eighteenth century, see Wittkower, Palladio and English Palladianism; and John Harris, The Palladian Revival: Lord Burlington, His Villa and Garden at Chiswick (New Haven, CT: Yale University Press, 1994).
THE CONTESTED INSPIRATION OF KENT'S LANDSCAPING INNOVATION: NATIVE INGENUITY, RENAISSANCE ITALY, ANCIENT ROME, OR CHINA
Infinitely flexible, Palladianism was the bridge from the classical language of architecture to its modern dialect--a bridge that stretched beyond 18th-century America into recent times.
Architect of the Republic
(68) Rudolf Wittkower, Palladio and English Palladianism (London: Thames & Hudson, 1974), p.
Venice's European diaspora: the case of James Leoni (1685-1746)
(66.) Steven Parissien, "'The Eclecticism of Roger Morris," in New Light on English Palladianism. Papers Given at the Georgian Group Symposium (London: The Georgian Group, 1990), 53-54.
"Begin to grow rude and clamorous": English politics and the battle over church architecture, 1714-1760
The exhibition emphasises yet again that, if Palladianism is a game with strict rules, it is one that appeals to the unimaginative plodder (the Arts and Crafts architect C.F.A.
'Palladio has a stultifying hold on the architectural imagination'
Robert Tavernor is Professor of Architecture and Urban Design at LSE, author of Palladio and Palladianism (Thames & Hudson, 1991), and co-translator (with Richard Schofield) of Andrea Palladio: The Four Books on Architecture (MIT Press, 1997).
Palladian Revival
The author lucidly demonstrates that the first three Masonic degrees, among other things, embodied doctrines of deism, Newtonianism, and Palladianism; he also argues that these three degrees fused the teachings of classical civilization with those of eighteenth century society and thus revealed the importance of order and harmony within Nature.
Revolutionary Brotherhood: Freemasonry and the Transformation of the American Social Order, 1730-1840
Having helped supply a roof structure that did not collapse, in May 1785 Menelaws was hired as assistant to the prodigious Nikolay Lvov, who by this time had commenced his own adaptation of the innovative Palladianism which Cameron was expressing in projects such as the seminal Cathedral of Sophia (1782-88) with its innovative use of the Greek Doric order and its interpretation of the Villa Rotonda, Vicenza.
Scottish architects in tsarist Russia
There are echoes of the work of Robert Adam in this, and of English Palladianism, but Cameron's Neoclassicism was also inventive and resourceful.
Architecture
It was to be the new Palladianism. The admirable aim was to make architecture richer and more approachable and responsive to human life.
Death of high Modernism; Escaping from the grey: Regionalism and the pursuit of roots; High-Tech; PoMo and neo Neo-Classicism
The change in taste which was to alter the direction of nineteenth-century British architecture as well as the appearance of many cities -- for good or ill -- was originally linked with Romanticism, the discovery of Nature, the vogue for the picturesque, the cult of ruins, the yearning for mystery and was a revolt against the predictability of Palladianism. Initially, the revival was a rural phenomenon: the intrusion into towns came later with the explosion of church building after the Church Building Act of 1818 when 214 Anglican churches were built as a consequence of the growth of the urban population as well as the equation of godlessness with revolution.
Penrhyn Castle
Perhaps because Gibbs was a Tory and Walpole the leader of the Whigs, or maybe because his style had been superseded by the rise of Palladianism, he was replaced as architect at Houghton by Colen Campbell (1676-1729), whose patron Lord Burlington had likewise dismissed Gibbs from Burlington House in London.
Houghton revisited: Houghton Hall is a remarkable survival--a stately home that has remained largely unaltered since it was commissioned by Sir Robert Walpole in the 18th century. Lord Cholmondeley talks to Apollo about the history of the estate and his commitment to its future