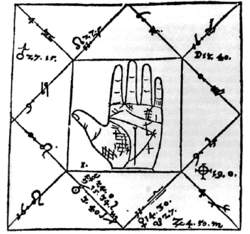 A diagram depicting the ancient art of palm-reading or handprint analysis. Reproduced by permission of Fortean Picture Library.

In earlier times when the general populace’s knowledge of astrology extended beyond newspaper predictions and sun signs, astrology was more than just the science of the stars. Properly understood, astrology was a universal language or symbolic code that contained widely recognized archetypes of general principles, types of humanity, and aspects of personality. Given the usefulness of this symbolic code, it was natural that astrological language and symbols would be adopted by other occult arts, such as the tarot and palmistry.

In palmistry, the planets, including the luminaries (the Sun and the Moon), were used to name as well as to represent the principles of certain parts of the hand: Mercury, the little finger; the Sun, the ring finger; Saturn, the middle finger; Jupiter, the index finger; Mars, the center of the palm; Venus, the root of the thumb; and the Moon, the lower mound of the hand. Various other lines and areas also bore the names of planets. The classical elements were utilized in certain systems of hand classification, so some palmistry books refer to water hand, earth hand, fire hand, and air hand. As a student of astrology might anticipate, a water hand indicates a sensitive disposition, an air hand indicates an intellectual nature, and so forth. Despite palmistry’s wholesale borrowing of astrological terminology, modern astrologers have shown little or no interest in studying correlations between patterns in palms and patterns in astrological charts.

Feedback
Flashcards & Bookmarks ?
Please log in or register to use Flashcards and Bookmarks. You can also log in with
Flashcards ?
My bookmarks ?
+ Add current page to bookmarks
References in periodicals archive ?
Using a mixture of palmistry and astrology, Bettina has devised a technique for women to pick the perfect partner - simply by asking for his star sign, then looking at his hands.
LOVE in the palm of your HAND; Mirror Woman Astrology
Encyclopedia browser ?
Full browser ?
CITE
Site: Follow: Share:
Open / Close