, in astronomy
Pandora (păndôrˈə), in astronomy, one of the named moons, or natural satellites, of Saturn. Also known as Saturn XVII (or S17), Pandora is an irregularly shaped (nonspherical) body measuring about 71 mi (114 km) by 52 mi (84 km) by 38 mi (62 km); it orbits Saturn at a mean distance of 88,050 mi (141,700 km) and has an orbital period of 0.6285 earth days. The rotational period is unknown but is assumed to be the same as the orbital period. It was discovered by a team led by S. Collins in 1980 from an examination of photographs taken by Voyager 1 during its flyby of Saturn. Pandora is more heavily cratered—with at least two of the craters being more than 18 mi (30 km) in diameter—than the nearby moon Prometheus but exhibits neither linear ridges nor valleys. Pandora is the outer shepherd satellite (a moon that limits the extent of a planetary ring through gravitational forces) of Saturn's F ring.

, in Greek mythology
Pandora (păndôrˈə), in Greek mythology, first woman on earth. Zeus ordered Hephaestus to create her as vengeance upon man and his benefactor, Prometheus. The gods endowed her with every charm, together with curiosity and deceit. Zeus sent her as a wife to Epimetheus, Prometheus' simple brother, and gave her a box that he forbade her to open. Despite Prometheus' warnings, Epimetheus allowed her to open the box and let out all the evils that have since afflicted man. Hope alone remained inside the box.
The Columbia Electronic Encyclopedia™ Copyright © 2022, Columbia University Press. Licensed from Columbia University Press. All rights reserved.

(pan-dor -ă, -doh -ră) A small irregularly shaped satellite of Saturn, discovered in 1980 from photographs taken by Voyager 1. It appears to be heavily cratered, the two largest craters being some 30 km in diameter. Together with Prometheus, Pandora is a shepherd satellite for Saturn's F ring. See Saturn's rings; Table 2, backmatter.
Collins Dictionary of Astronomy © Market House Books Ltd, 2006 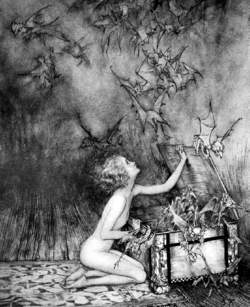 [pan′dȯr·ə]
(astronomy)
A satellite of Saturn which orbits at a mean distance of 88,000 miles (142,000 kilometers), just outside the F ring; together with Prometheus, it holds this ring in place.
McGraw-Hill Dictionary of Scientific & Technical Terms, 6E, Copyright © 2003 by The McGraw-Hill Companies, Inc.