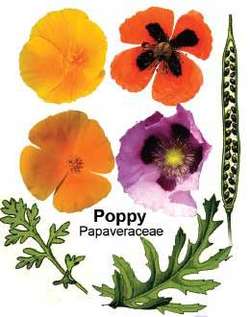 Poppies contain both morphine and codeine, which are pain-relieving drugs that are still used today. They come in all colors, with 4-6 petals. Many contain opiates, so they make you feel peaceful. Ancient doctors had their patients eat poppy seeds to relieve pain. The seeds contain the most medicinal properties. Poppy is used for pain, insomnia, nervousness, and chronic coughs. Don’t use if you’re being tested for drugs, as it can cause you to test positive.(This includes poppy seeds used in baked goods!)
Edible Plant Guide © 2012 Markus Rothkranz
The following article is from The Great Soviet Encyclopedia (1979). It might be outdated or ideologically biased.

(poppy), a family of dicotyledonous plants, including mostly herbs and some shrubs and small trees. The flowers are regular, bisexual two- or, less frequently, three-parted, and usually large; they are solitary or sometimes in inflorescences. The gynoecium has two or more carpels, and the ovary is usually superior. The fruit is a capsule. Most Papaveraceae are characterized by segmented milk vessels containing a colored or, less frequently, colorless juice. There are approximately 25 genera, with 450 species, distributed primarily in the temperate and subtropical zones of the northern hemisphere. Six genera, with about 70 species, are found in the USSR. The most important genera are Papaver, Chelidonium, Meconopsis, and Eschscholzia (the last two are ornamentals). The family Fumariaceae is sometimes treated as a subfamily of Papaveraceae. The genus Hypecoum is sometimes classified as the special family Hypecoaceae.