[′par·ə‚lel di′splās·mənt]
(mathematics)
A vector A at a point P of an affine space is said to be obtained from a vector B at a point Q of the space by a parallel displacement with respect to a curve connecting A and B if a vector V (X) can be associated with each point X on the curve in such a manner that A = V (P), B = V (Q), and the values of V at neighboring points of the curve are parallel as specified by the affine connection.
McGraw-Hill Dictionary of Scientific & Technical Terms, 6E, Copyright © 2003 by The McGraw-Hill Companies, Inc.
The following article is from The Great Soviet Encyclopedia (1979). It might be outdated or ideologically biased.

a generalization of the concept of translation to spaces with a more complex structure than Euclidean spaces, for example, affinely connected spaces and, in particular, Riemannian spaces. Parallel displacement permits the comparison of geometric figures associated with different points of a space.

A parallel displacement on a surface Σ in three-dimensional Euclidean space, where Σ is a two-dimensional Riemannian space, is defined as follows. Let γ be a curve on Σ, let A and B be the endpoints of y, let S be the developable surface that is the envelope of the family of tangent planes at points of y, and let a be a vector at the point A in the tangent plane πA (see Figure 1). When S is developed on a plane, the translation of a in S with a subsequent adjoining of S to γ is called the parallel dislacement of a. The vector a* in Figure 1 is the result of a parallel displacement of a along γ in Σ. 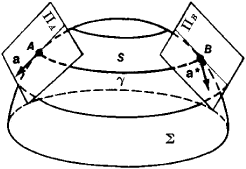 Parallel displacement can be regarded as a linear transformation of a tangent plane πA at a point A into a tangent plane ΠB at a point B. Such a transformation can be described by formulas expressed in terms of Christoffel symbols. These formulas can be generalized to n-dimensional Riemannian spaces and to affinely connected spaces; the Christoffel symbols can accordingly be calculated through the use of a metric tensor or be given as the initial parameters of the theory.