[pa′skalz ‚thir·əm]
(mathematics)
The theorem that when one inscribes a simple hexagon in a conic, the three pairs of opposite sides meet in collinear points.
McGraw-Hill Dictionary of Scientific & Technical Terms, 6E, Copyright © 2003 by The McGraw-Hill Companies, Inc.
The following article is from The Great Soviet Encyclopedia (1979). It might be outdated or ideologically biased.

a theorem of geometry asserting that for any hexagon inscribed in a conic section (an ellipse, hyperbola, or parabola) the points of intersection of the three pairs of opposite sides (or of the sides’ extensions) lie on a single line called the Pascal line. The hexagon may be either convex or star-shaped. Figure 1 shows a hexagon whose vertices are successively numbered 1, 2, 3, 4, 5, and 6.

The theorem was established by B. Pascal in 1639. Pappus’ theorem, a special case of Pascal’s theorem for a pair of intersecting lines (a degenerate conic section), has been known since antiquity. This case is shown in Figure 2, where the vertices 1, 3, and 5 lie on one line and the vertices 2, 4, and 6 lie on the other 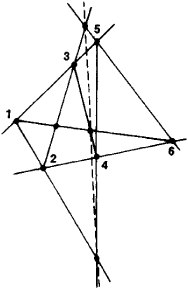 Feedback
Flashcards & Bookmarks ?
Please log in or register to use Flashcards and Bookmarks. You can also log in with
Flashcards ?
My bookmarks ?
+ Add current page to bookmarks
References in periodicals archive ?
To this end we use the Pascal theorem ([12, Section 3.8]), which concerns a general hexagon inscribed in a circle.
The Pascal theorem holds for all kinds of inscribed hexagons including self-intersecting hexagon and this fact is used in the proof (figure 6).
According to the Pascal theorem the points E, Q and F lie on the same straight line.
The proof of the construction of the tangents was made by using tools of mathematics from different fields, and at its end--on the Pascal theorem. This situation indicates the importance of acquaintance with "forgotten" theorems in geometry.
According to the Pascal theorem, the points K, L and P lie on the same straight line.
More on geometrical constructions of a tangent to a circle with a straightedge only
Encyclopedia browser ?
Full browser ?
CITE
Site: Follow: Share:
Open / Close