[′pas·iv ′rā‚där]
(engineering)
A technique for detecting objects at a distance by picking up the microwave electromagnetic energy that is both radiated and reflected by all bodies.
McGraw-Hill Dictionary of Scientific & Technical Terms, 6E, Copyright © 2003 by The McGraw-Hill Companies, Inc.
The following article is from The Great Soviet Encyclopedia (1979). It might be outdated or ideologically biased.

an apparatus for locating an object by means of the object’s own radiation. Since a passive radar system does not emit energy, it can operate in great secrecy, and the detection and jamming of it are much more difficult than is the case with active radar. A distinction is made between passive detection of objects with artificial (various types of radio transmitters) emission of radio waves and objects with natural (thermal) emission of such waves.

A passive radar system’s reception of the radio waves emitted from land and water surfaces can be used to map an area for navigation purposes, to perform a reconnaissance survey of the area, and to detect isolated objects that are intense radio-frequency emitters. Such passive systems have a receiver and an antenna with a narrow, needle-shaped radiation pattern that scans a given sector. The signals received are processed in the receiver and then go on to a cathode-ray oscilloscope, whose scanning is synchronized with the movement of the antenna’s radiation pattern. A pattern of the thermal radiation from the area is obtained on the screen of the oscilloscope.

Passive radar systems are also used to detect aerospace objects and to determine the objects’ coordinates—particularly ballistic rockets during powered flight. Another use of passive radar is the determination of the angular coordinates of extraterrestrial sources of radio-frequency radiation. Such coordinates serve the navigational purpose of determining the latitude and longitude of the passive radar system’s position.

Unlike active radar, passive radar cannot determine the distance to an object from the information in signals received at only one point. In order to find the complete coordinates of an object, joint use must be made of two or more passive radars that are separated by a known distance. There are three ways of determining through passive radar the coordinates of objects that emit radio waves: the goniometric, the differential-range, and the goniometric-differential-range methods. 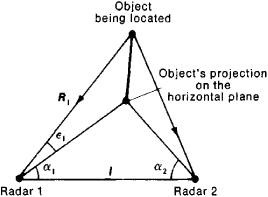 With the goniometric method it is necessary to determine only the direction to the object from two (or more) passive radars (Figure 1) that are separated by a distance l. If the object and the two radars are located in the horizontal plane, it suffices to find the two azimuthal angles; if they are located in the vertical plane, it is enough to find the two angles of elevation. The distance is then determined by solving the triangle. To find the coordinates of an object in the general case, no less than three angular coordinates must be measured. When two azimuths and one elevation have been determined, the distance from the first radar to the object can be calculated from the formula

The differential-range method of coordinate determination involves a measurement of the differences of the distances from the object being located to the passive radars. In order to find the coordinates of an object in a plane, it is necessary to determine at least two differences between distances; to do this, at least three spaced passive radars are needed. Just as in differential-range radio-navigation systems, the position of the object is determined by the point of intersection of the hyperbolas that correspond to the measured differences between the distances and have foci at the radar sites.

A combination of the first two methods, the goniometric-differential-range method involves a determination of the directions and the difference between the distances from the object to the radars. Here, at least two passive radars are required. The planar coordinates of an object can be found by measuring one angular coordinate and the difference between the distances.

The operating range of passive radar systems for sharply contrasting (that is, with their surroundings) objects can exceed the range of active, or radiating, radars. The accuracy of angular coordinate measurement is approximately the same for passive and active radars, but range-measuring accuracy is generally worse for passive radars.