the oxidative transformation of a metal’s surface into the passive state, in which corrosion is strongly inhibited. Passivation has great practical significance, since without spontaneous passivation all structural metals would undergo rapid corrosion not only in aggressive chemical mediums but also in the moist atmosphere of the earth or in fresh water. 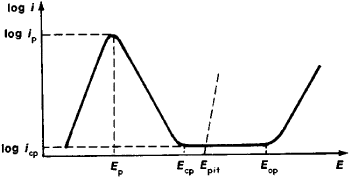 The dissolution of the metal is accelerated beyond the overpassivation potential, and the metal is said to be in the overpassive, or transpassive, state. The range of potentials from Ecp to Eop is called the passive-state region. In the presence of CI-, Br-, and I- ions, strong dissolution, or pitting, of some passive metals begins below Eop. The pitting potential appears in Figure 1 as Epit. All the above-mentioned potentials and current densities are also characteristic of a metal when corrosion occurs under the influence of oxidizing agents. Thus, a metal corrodes at a minimum rate (equivalent to the current density in the complete passive state, icp) when the oxidation-reduction potential, Eor, of the medium satisfies the condition Ecp < Eor< Eop. In order for spontaneous passivation to occur, that is, passivation in the absence of an external current, the rate of reduction of the oxidizing agent by Ep should be no less than ip. For example, dilute solutions of nitric acid satisfy the conditions for both spontaneous passivation and minimum passivation rate when the metal is chromium, while the same solution satisfies only the conditions for minimum passivation rate when the metal is iron. Thus, chromium is spontaneously passivated in these solutions, while iron can only retain the passive state that had been previously effected by other means.

Since ip and icp for chromium are hundreds of times less than for iron and since Ecp and Eop are more electronegative in chromium than in iron by a factor of 0.4–0.5 volt, chromium is much more stable than iron in weak oxidizing mediums, although it is readily decomposed as a result of overpassivation in vigorous oxidizing mediums, such as fuming nitric acid and acids with added permanganates and chromates. A large increase in the concentration of acid or base usually leads to an increase in ip and icp, and only a few metals are stable in such mediums; the most important such metals are titanium, zirconium, chromium, nickel, and alloys with a high content of chromium or nickel.

Most metals have a tendency toward passivation in neutral mediums. Often, passivation can occur in nonaqueous solvents only in the presence of moisture. The adsorption of oxygen and the formation of oxide layers are important to an understanding of the theory behind passivation.

Overpassivation results from the formation of higher oxides of the metal, which either dissolve completely to give anions, for example, CrO42-, or supply the solution with their own cations, which decompose with the release of oxygen; NiO2 is a typical higher oxide that supplies cations. The oxygen that participates in forming the passivated layer can be supplied by such oxidizing agents as H2O2 or HNO3. Passivation may be facilitated by anions that give sparingly soluble salts or mixed oxides of the metal that is being passivated. However, the most widespread source of passivating oxygen is water, which reacts either chemically or electrochemically with the metal.

In industry, the term “passivation” refers to a special chemical or electrochemical procedure by which a metal is treated in a suitable solvent in order to supplement the anticorrosive properties that are provided by the metal’s original passive state. For example, aluminum ware is passivated in 30-percent nitric acid, and zinc coatings are passivated in chromate solutions. The substances that are used for passivation are usually oxidizing agents and are called passivators.

Feedback
Flashcards & Bookmarks ?
Please log in or register to use Flashcards and Bookmarks. You can also log in with
Flashcards ?
My bookmarks ?
+ Add current page to bookmarks
References in periodicals archive ?
The reaction scheme for the passivation of metals by polyaniline and amazing corrosion protection properties of PANi can be shown as the following equations (3)-(7).
(17.) Wessling, B, "Passivation of Metals by Coating with Polyaniline." Adv.
Application of polyaniline/nylon composites coating for corrosion protection of steel
Electroactive Polymers for Corrosion Control (American Chemical Society Symposium Series 843) discusses electroactive polymers, electrically conductive polymers, and mechanisms of protection from corrosion (passivation of metals), and is intended to inform chemists and engineers as to how to prevent the corrosion of metals.
Electroactive Polymers for Corrosion Control. (Books)
(42.) Wessling, B, "Passivation of Metals by Coating with Polyaniline, Corrosion Potential Shift and Morphological Changes." Adv.
Corrosion protection of magnesium alloy ZM21 by polyaniline-blended coatings
Encyclopedia browser ?
Full browser ?
CITE
Site: Follow: Share:
Open / Close