Patrick, Saint, c.385–461, Christian missionary, the Apostle of Ireland, b. Bannavem Taberniae (an unknown place in Britain, possibly near the Severn or in Pembroke). He was one of the most successful missionaries in history.

Early Life and His Calling

The facts of Patrick's life are largely obscured by legend. He belonged to a Christian family of Roman citizenship. Captured when barely 16 by Irish marauders and enslaved, he worked for six years as a herder on the slopes of Slemish (near Ballymena, Co. Antrim) or of Croaghpatrick or (most likely) of both. Then, in response to a voice, he escaped and embarked for Gaul.

Patrick spent some years wandering on the Continent and probably visited the Monastery of St. Martin at Marmoutier. He entered the monastery at Lérins and received the tonsure. He returned c.413 to his native Britain and lived for some years with relatives. During this time he had a vision that called him to return to Ireland to Christianize it. Accordingly, he returned to Europe (c.419) to perfect himself as a missionary. The next 12 years were spent in study at Auxerre. In 431, St. Palladius, first missionary bishop sent to Ireland, died; Patrick was consecrated (432) in his place by St. Germanus of Auxerre.

In the winter of 432 Patrick landed near Saul and remained until spring, when he went to Tara and gained his first major converts. He defied the pagan priests of Tara by kindling the Easter fire on Slane, a nearby hill. This challenge to paganism created at first indignation, and subsequently respect, in the court of the high king. Tara became Patrick's headquarters, and with a band of followers he successively converted Meath, Leitrim, Cavan, and W Ireland. Further details of his missions are only generally known.

In 444 or 445, with the approval of Pope St. Leo I, Patrick established his archiepiscopal see at Armagh. St. Patrick's mission was successful; Ireland was almost entirely Christian by the time of his death. He understood and wisely preserved the social structure of the country, converting the people tribe by tribe. Out of his hierarchy, organized by tribal units, developed the Celtic abbot-bishop system. At Patrick's instance, the traditional laws of Ireland were codified. Patrick modified them to harmonize with Christian practice, and he mitigated the harsher ones, particularly those that dealt with slaves and taxation of the poor. He introduced the Roman alphabet. In 457 he retired to Saul, where he died.

He was buried in Downpatrick, which was a great European shrine until its destruction by the English government in 1539. Also enshrined to him is Croaghpatrick. Patrick's connection with Saint Patrick's Purgatory in Lough Derg is undoubtedly only legendary. His personality is said to have been unusually winning, and many legends have become attached to his name. Feast: Mar. 17.

The prime source for Patrick's life is the Confessions, a moving apology for his life and work written during his last years. Some years earlier he had written the Letter to the Soldiers of Coroticus. This is an angry appeal to raiders, supposedly Roman-British Christians, to repudiate their ruler Coroticus for his bloody raid on Ireland and to return the women taken captive. St. Patrick was probably the author of the Lorica (or Breastplate) of St. Patrick, also called The Cry of the Deer (in Irish, Fáed Fíada), a mystic poem of faith written in Irish and Latin. See L. Bieler, ed., Works of Saint Patrick (1953); biographies by J. B. Bury (1905, repr. 1998), P. Gallico (1958), and P. Freeman (2004); study by R. P. C. Hanson (1968). 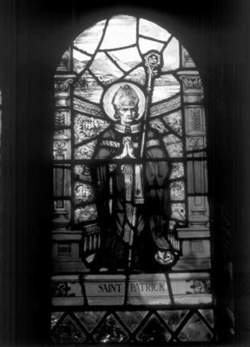 Stained-glass image of St. Patrick, the patron saint of Ireland, from the cloisters of Chester Cathedral. Fortean Picture Library.

Did Saint Patrick really drive all the snakes out of Ireland? Did he convert the Irish by convincing them of the reality of the trinity by using the shamrock as an illustration? Did he convert Ireland all by himself?

The snake myth may refer to the fact that the Genesis serpent represented sin. And Patrick was a convincing preacher who was aided by a geographical situation that prevented snakes from reaching Ireland in the first place.

The shamrock was symbolic of the luck of the Irish. Patrick probably didn't even think of it—but as a teaching device, it works.

But none of this detracts from the legend. Patrick was an amazing missionary.

He was probably born in Scotland, perhaps of British ancestry and maybe in a village called Bannavem Taberniac. The other possibilities are Gaul or Kilpatrick, near Dunbarton. His father seems to have been a deacon or some kind of civic official. But his grandfather was a priest. The year was somewhere near 385 CE, and his name was Patricius Magonus Sucatus.

In 405 Patrick was captured by Irish raiders. He became a slave in Ireland, and it is unclear why he decided to go back there after he finally escaped and returned to his family, either seven or ten years later. Somehow, over the next fifteen years, he received some kind of training for the priesthood. He seems to have been ordained about 415 CE.

If you count the "probably," "seems to have," "maybe," and "possibly" statements so far, you begin to get the idea we don't know a lot about what his early life was like. What we do know is that, whatever the cause and however it happened, he returned to Ireland and did great missionary work. His legend may have grown over the centuries, but it created for him an Irish reputation and legacy that cannot be discounted.

He was said to have been a bit of a mystic, seeing visions and hearing voices. But regardless of his methods, Ireland is Catholic because of him.

"I was like a stone lying in deep mire," he wrote. "And he that is mighty came, and in His mercy lifted me up, and verily raised me aloft and placed me on top of the wall."

He is said to have converted whole villages with his compassionate logic and ability to speak to Irish sensibilities. During Mass he once accidentally speared a potential convert in the foot when, lost in the beauty of the Mass, he pounded too hard with his bishop's mace. The convert thought it was part of the initiation rite and considered himself blessed to share in Christ's crucifixion.

Patrick was said to have baptized whole villages, a hundred or so at a time. He is probably the best-known and most beloved missionary the Roman Catholic Church ever sent forth. And the most successful.

Born at the end of the fourth century: died in the mid-fifth century. Founder and first bishop of the Catholic Church in Ireland.

Much of the biographical information about St. Patrick is legend. The historical existence of Patrick himself has been repeatedly disputed. According to information contained in works ascribed to him, Patrick was born in Britain, ordained in Gaul, and began to preach Christianity in Ireland in the 430’s. He was canonized by the Catholic Church (March 17 is St. Patrick’s Day). He is considered Ireland’s apostle and patron saint, and St. Patrick’s Day is a national holiday in Ireland.