Priapulida, phylum consisting of 17 species of predatory, unsegmented marine worms that live in the sand and mud at the sea bottom. The largest are 4 to 6 in. (10–17 cm) long, but the majority of species are less than .05 in. (.13 cm) in size. The animals consist of a spiny body with an anterior that can be everted or inverted into the trunk for locomotion or feeding. Spines around the mouth and in the pharnyx are everted to capture prey. The sexes are separate and the egg is fertilized externally, hatching into a larval stage in all but one species. Fossil species can be traced to the Cambrian period, but zoologists do not agree on an interpretation of the lining of the body cavity. This would determine if priapulids are coelomates or pseudocoelomates.
The Columbia Electronic Encyclopedia™ Copyright © 2022, Columbia University Press. Licensed from Columbia University Press. All rights reserved. 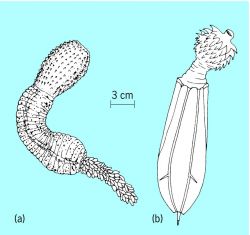 Feedback
Flashcards & Bookmarks ?
Please log in or register to use Flashcards and Bookmarks. You can also log in with
Flashcards ?
My bookmarks ?
+ Add current page to bookmarks
Mentioned in ?
References in periodicals archive ?
Laureen Uy and Nat Ho, went to Korea, where they got to talk to a prince (the grandson of Korea's last emperor), wear hanbok and try penis worms.
Can you survive for 60 hours without sleep?
"They didn't want to eat that but Paul said 'just chew it,'" Uy said of the penis worms while Ho said "We did it together in the count of three."
60 hours of fun
What appear to be individual peripheral nerves shoot off from the nerve cord, resembling the segmented nerve roots seen in penis worms and velvet worms.
Fossil reveals arthropod's nervous system