Pentagon Papers, government study of U.S. involvement in Southeast Asia. Commissioned by Secretary of Defense Robert S. McNamara in June, 1967, the 47-volume, top secret study covered the period from World War II to May, 1968. It was written by a team of analysts who had access to classified documents, and was completed in Jan., 1969. The study revealed a considerable degree of miscalculation, bureaucratic arrogance, and deception on the part of U.S. policymakers. In particular, it found that the U.S. government had continually resisted full disclosure of increasing military involvement in Southeast Asia—air strikes over Laos, raids along the coast of North Vietnam, and offensive actions by U.S. marines had taken place long before the American public was informed. On June 13, 1971, the New York Times began publishing a series of articles based on the study. The Justice Dept. obtained a court injunction against further publication on national security grounds, but the Supreme Court ruled (June 30) that constitutional guarantees of a free press overrode other considerations, and allowed further publication. The government indicted (1971) Daniel Ellsberg, a former government employee who made the Pentagon Papers available to the New York Times, and Anthony J. Russo on charges of espionage, theft, and conspiracy. On May 11, 1973, a federal court judge dismissed all charges against them because of improper government conduct. 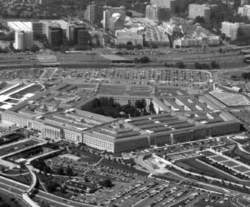 An aerial view of the Pentagon in Washington, D.C. When the “Pentagon Papers” were leaked in 1971, detailing the United States’ involvement in Vietnam from 1945 to that year, President Nixon denied knowledge of their contents.

The Pentagon Papers, with their revelations of the vast litany of lies that the U.S. Department of Defense and the president issued to the American people about Vietnam, probably did more than any single factor in the past fifty years to create distrust in the government.

On June 13, 1971, President Richard M. Nixon opened up his Sunday New York Times to see a picture of his daughter Tricia and himself from her wedding in the White House Rose Garden. Next to the photograph, on the right, was the headline over Neil Sheehan’s initial story on the Pentagon Papers, “Vietnam Archive: Pentagon Study Traces 3 Decades of Growing U.S. Involvement.” Nixon would maintain that he never read the article, but he told Secretary of State Henry Kissinger later that day that certain people had to be “put to the torch” and jailed for leaking such information to the press.

The Pentagon Papers constitute a massive seven-thousand-page, above-top-secret Defense Department history of America’s involvement in the Vietnam War from 1945 to 1971. This historic document, leaked to the press by Daniel Ellsberg, a Defense Department staff member, has probably done as much as any single factor in the past fifty years to create distrust of the machinations of the U.S. government by its people. Among other things, the Pentagon Papers disclosed that the government fully intended to go to Vietnam in spite of President Lyndon B. Johnson’s promises to stay out of the mess that the French had left in that country. In addition, the papers revealed that there was no plan to end the war.

On June 14 H. R. Haldeman, White House chief of staff, told President Nixon that out of the “gobbledygook, comes a very clear thing: you can’t trust the government; you can’t believe what they say; and you can’t rely on their judgment. [A]nd the implicit infallibility of presidents, which has been an accepted thing in America, is badly hurt by this.” That summed up the impact of the Pentagon Papers as succinctly as anyone could. In a time of national protest against the U.S. military’s involvement in Vietnam, a time of draft-card burning, protest marches, college laboratory bombings, sit-ins, flower children, and the Age of Aquarius, Nixon’s nose had stretched way beyond Pinocchio’s. Had the government ever told its citizens the truth about anything? Suddenly every conspiracy theory from Roosevelt allowing the attack on Pearl Harbor to the government cover-up of UFOs was given new validity. If even the White House chief of staff admitted that “you can’t trust the government,” why should anyone?

The New York Times began publishing excerpts of the Pentagon Papers on June 13. On the evening of June 14 Attorney General John Mitchell warned the Times by telephone and telegram against any further publication. On June 15 the U.S. government won a restraining order against the Times. The Washington Post picked up the cause on June 18 and began publishing excerpts from the Pentagon Papers. That same day, Assistant Attorney General William Rehnquist advised the Post to stop publishing the Papers. The Post refused, and the Justice Department sought an injunction against the newspaper. This time the court refused the government’s request, and the Justice Department appealed. At the same time, the New York Times was appealing the injunction against them.

On June 26 the Supreme Court of the United States agreed to combine the cases into New York Times Co. v. U.S. (403 U.S. 713). On June 29 Senator Mike Gravel of Alaska entered 4,100 pages of the Pentagon Papers into the record of his subcommittee on Buildings and Grounds. This portion of the original 7,000 pages was later published in book form by Beacon Press of Boston.

On June 30 the Supreme Court made what is arguably the most important decision in U.S. history regarding freedom of the press. By a 6-3 vote, the Court ordered the prior restraints against the newspapers lifted, stating that the government had not met the burden of proof. The justices wrote nine separate opinions, sharply disagreeing on substantive issues. While the decision was an undeniable victory for the First Amendment, these disagreements made some journalists uncertain what protection there would be for future editors and publishers when issues of national security were alleged to be at stake.

The publication of the Pentagon Papers strengthened the protests against the war in Vietnam and greatly widened the credibility gap between the American public and the U.S. government.

Feedback
Flashcards & Bookmarks ?
Please log in or register to use Flashcards and Bookmarks. You can also log in with
Flashcards ?
My bookmarks ?
+ Add current page to bookmarks
Mentioned in ?
References in periodicals archive ?
In the case of the Pentagon Papers, former Rand Corp.
What separates Assange from the ranks of real journalists
The Pentagon Papers marked the point when Washington Post changed from a provincial paper to a national institution.
Why target the press for protecting its sources?
The Pentagon Papers were secret studies ordered by Defense Secretary Robert McNamara that exposed in great detail how the reality of American involvement in Vietnam was very different from the official story.
Speaking truth to power
The attorney general of the United States, however, ordered The Times to stop publishing the Pentagon Papers, giving The Post an opportunity to run the story.
Review: Spielberg's 'The Post' a timely nod to press freedom
"The Post" dramatizes the 1971 battle by American newspapers to publish leaked documents, known as the Pentagon Papers, about the U.S.
Hezbollah criticizes Lebanon decision to allow Spielberg film
Known as the Pentagon Papers, the then president Richard Nixon demands the documents remain classified and goes to war with the press.
Spielberg movie should be big news at Academy Awards
The Post, starring Tom Hanks and Meryl Streep and focusing on the publication of the Pentagon Papers, was scheduled to premiere in Beirut on January 18.
Lebanon Bans Spielberg's 'The Post'
The past comes alive at this time of year, period settings and historical figures boosting Oscar pretensions through the usual truth-trumps-fiction Hollywood calculus -- and Winston Churchill in Darkest Hour (opening on Thursday) is the main historical figure this year, overshadowing the likes of Ms Graham and her editor Ben Bradlee (Tom Hanks) in Steven Spielberg's account of the 1971 'Pentagon Papers' case.
Film review: The Post ***
The drama tells the story of Kay Graham (Meryl Streep), The Washington Post publisher, and the paper's editor, Ben Bradlee (Tom Hanks), as they work to print the Pentagon Papers, having to go through countless obstacles along the way.
How Much Of 'The Post' Movie Was True?
The year is 1971 and the fight is over the Pentagon Papers, a trove of classified documents published by The Washington Post despite legal threats from Richard Nixon's White House.
Tom Hanks and Meryl Streep shine in The Post
It's also a strong Oscar contender after picking up a best film of 2017 award.In his latest film about the battle by newspapers to publish the leaked Pentagon Papers detailing the US government's misleading portrayal of the Vietnam War, director Steven Spielberg rushed to get the movie shot and released within a year.
Spielberg's 'The Post': a cautionary tale of press freedom
Presidents pushed the country's first female newspaper publisher, Kay Graham (Streep) of The Washington Post and its hard-driving editor, Ben Bradlee (Hanks), to join an unprecedented battle between journalist and government in publishing the Pentagon Papers.
NBR 2017: Steven Spielberg's 'The Post' bags Best Film award