purgatory (pûrgˈətôrˌē) [Lat.,=place of purging], in the teaching of the Roman Catholic Church, the state after death in which the soul destined for heaven is purified. Since only the perfect can enjoy the vision of God (inferred from Mat. 12.36; Rev. 21.17), and some die in grace who have still unpunished or unrepented minor sins on their conscience, they must be purged of such sins. Those who have suffered already (especially the martyrs) may have undergone much or all of their punishment. Souls in purgatory are members of the church along with the living and the blessed in heaven and may be helped, as in life, by the prayers and works of their fellow members. This unity is the communion of saints. Prayers for the dead are therefore commonplace in Roman Catholic life; one form is the requiem Mass (see also indulgence). The duration of time and the nature of the state of purgatory are not defined; the suffering is different in kind from that of hell, for the soul in purgatory knows that his punishment is temporary. The ancient Jews prayed for the dead (2 Mac. 12.43–46), and the Christians continued the practice, holding the concomitant belief in a middle state between life and heaven. The Eastern Orthodox Church maintains this position without adopting the Western terms developed in the Middle Ages. Protestants have generally abandoned it.
The Columbia Electronic Encyclopedia™ Copyright © 2022, Columbia University Press. Licensed from Columbia University Press. All rights reserved. 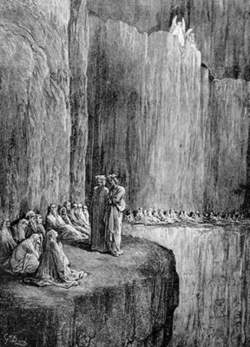