[′pər·mə·nənt ′mag·nət]
(electromagnetism)
A piece of hardened steel or other magnetic material that has been strongly magnetized and retains its magnetism indefinitely. Abbreviated PM.
McGraw-Hill Dictionary of Scientific & Technical Terms, 6E, Copyright © 2003 by The McGraw-Hill Companies, Inc.
The following article is from The Great Soviet Encyclopedia (1979). It might be outdated or ideologically biased.

an article of a specific shape (such as a horseshoe or bar) made of previously magnetized ferromagnets or ferrimagnets that are capable of retaining high magnetic induction after removal of the magnetizing field (called hard-magnetic materials). Permanent magnets are widely used as independent sources of a constant magnetic field in electrical engineering, electronic technology, and automation. 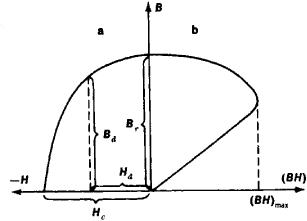 A permanent magnet is usually used to produce a magnetic flux in an air gap—for example, between the poles of a horseshoe magnet. The air gap reduces the induction (and the magnetization) of the permanent magnet in the manner of an external demagnetizing field Hd. The magnitude of the field Hd that reduces the residual induction Br to a value Bd depends on the configuration of the permanent magnet. Thus, the magnetic fields produced by permanent magnets may have an induction B < Br. The greatest effectiveness is achieved if the state of the magnet corresponds to the point on the demagnetization curve where the product of B and H is at a maximum, (BH)max—that is, where the magnetic energy per unit volume of material is at a maximum. Among the materials from which permanent magnets are made are alloys based on iron, cobalt, nickel, aluminum and hexagonal ferrites. The newest and most effective materials include ferrimagnetic intermetallic compounds of the rare earths samarium and neodymium with cobalt (such as SmCo5). Such compounds have extremely high values of (BH) max (see Table 1).

An essential condition for achieving the highest magnetic characteristics in a permanent magnet is its preliminary magnetization up to a state of magnetic saturation. Another important requirement is the stability of the magnetic characteristics with time (that is, the absence of magnetic aging). Permanent magnets made from materials subject to magnetic aging undergo special treatments (thermal treatment and treatment in a variable magnetic field) to stabilize their condition.

Feedback
Flashcards & Bookmarks ?
Please log in or register to use Flashcards and Bookmarks. You can also log in with
Flashcards ?
My bookmarks ?
+ Add current page to bookmarks
Mentioned in ?
References in periodicals archive ?
For given values of the permanent magnet depth and the rotational speed an increase of the clearance to a certain value results in the rise of the mass flow rate; however, further widening the clearance would not result in more increase of mass flow rate.
Design optimization and analysis of AFPM synchronous machine incorporating power density, thermal analysis, and back-EMF THD
(63) The significance of Deng's observation has grown exponentially with the explosion of world demand for REEs and permanent magnet technology.
Enduring attraction: America's dependence on and need to secure supply of permanent magnets
Modeling, Simulation, and Analysis of Permanent Magnet Motor Drives, Part I: The Permanent Magnet Synchronous Motor Drive, 0093-9994/89/0300-0265
Sensorless control for interior permanent magnet synchronous motor with extended Kalman filter
The success of EVs is owed to the highly efficient permanent magnet motors used to run the power train of the EV.
The Impact of Magnetic Materials in Renewable Energy-Related Technologies in the 21st Century Industrial Revolution: The Case of South Africa
Section III explains the choice of different permanent magnet materials for the construction of the rotor of the machine.
Influence of magnet material selection on the design of slow-speed permanent magnet synchronous generators for wind applications
This finding has evidenced a clear magnetomechanical effect which should be taken into account when a magnetic elastomer is placed on a permanent magnet. The development of magnetic stress beside the mechanical stress is evidently a consequence of magnetic field distribution around the permanent magnet.
Sample Size Effect of Magnetomechanical Response for Magnetic Elastomers by Using Permanent Magnets
Torque production in a PMSM is due to the mutual coupling between a permanent magnet and an exciting stator coil.
New Stator Tooth for Reducing Torque Ripple in Outer Rotor Permanent Magnet Machine
In order to reduce the eddy current loss of permanent magnet, researchers have conducted a lot of research [1-5].
Calculation and Analysis of Permanent Magnet Eddy Current Loss Fault with Magnet Segmentation
Noida, India, December 05, 2015 --(PR.com)-- Permanent Magnets play an important role in our daily lives and can be found as critical components in everything from electric motors, hard disk drives, air conditioners, speakers, computers, microwave ovens, automobiles, mobile phones, imaging systems, etc.
Global Magnet Market: Industry Trends, Magnet Types, Major Markets, Manufacturing and Applications