The Permian system was identified in 1841 by the British geologist R. I. Murchison in the Urals and the Russian Plain. Before Murchison, deposits corresponding to the Permian system had been studied by Russian and foreign geologists and described under various names. Subsequent study of the Permian in Russia was conducted by V. P. Amalitskii, N. A. Golovkin-skii, A. P. Karpinskii, A. V. Nechaev, S. N. Nikitin, M. E. Noinskii, F. N. Chernyshev, A. A. Shtukenberg, and others. A large role in the investigation of the Permian has been played by such Soviet researchers as N. P. Gerasimov, G. A. Dutkevich, M. D. Zelesskii, I. A. Efremov, B. K. Likharev, E. M. Liut-kevich, A. N. Mazarovich, A. D. Miklukho-Maklai, V. D. Nalivkin, M. F. Neiburg, D. M. Rauzer-Chernousova, V. E. Ruzhentsev, D. L. Stepanov, E. I. Tikhvinskaia, V. I. Ustrist-skii, N. N. Forsh, and G. N. Frederiks. Abroad, important contributions to the study of the Permian have been made by W. Waagen, A. Grabau, C. Dunbar, C. Diener, F. Frech, E. Schelwien, C. Schuchert, and others.

Subdivisions. The Permian system is divided into two series —Lower and Upper. There is no generally accepted scheme for breaking the Permian into stages; different countries have adopted their own subdivisions. The most important schemes for division of the Permian have been worked out in the USSR, the countries of Western Europe, and the USA (Figure 1). 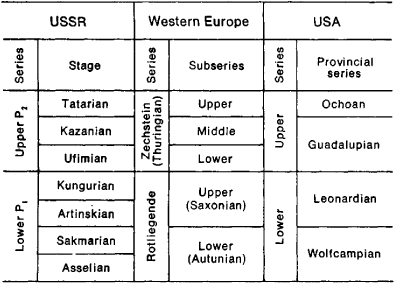 Figure 1. Schema of the stratigraphy of the Permian system

General description. The Permian period was characterized by intensive tectonic movements associated with the last phases of the Hercynian folding, which concluded the late Paleozoic stage of development of the earth’s crust. These movements were particularly marked in the geosynclinal zones: the Urals-Tien-Shan in the USSR, the Hercynian in Western Europe, and the Appalachian in North America. High mountain ranges emerged in these places. The vast spaces of the platform regions experienced uplifts accompanied by retreat of the seas, especially in the second half of the Permian. The Permian regression, one of the greatest in earth history, caused the vast seas that had existed at the start of the Permian to become separate, semien-closed basins whose salt regimes often differed greatly from the normal oceanic regime. By the end of the Permian, continental conditions prevailed over the greater part of the platform regions. Marine conditions continued only in certain geosynclinal regions, such as the Tethys and the Verkhoiansk region, and on the mobile sections of the platforms. Intensive underwater and surface volcanic activity occurred during the Permian. The plutonic form of magmatism (intrusions) was also common.

The climate of the Permian displayed a sharply marked zona-tion and increasing aridity.

A belt of humid tropical climate was well defined in the Permian and included the vast Tethys Sea. To the north was a hot and dry climatic belt characterized by extensive saline deposits and red beds. Further to the north was a more moderate, humid belt, the site of intensive coal accumulation. A southern moderate belt is indicated by the coal-bearing deposits of Gondwana-land. The polar regions were clearly defined. The beginning of the Permian was characterized by continental glaciation inherited from the late Carboniferous in the southern hemisphere (the Gondwanaland glaciation). In the northern polar region, no signs of early Permian continental glaciation have been established; it is possible that sea ice sediments were deposited there. The climate also cooled considerably in the middle of the late Permian. Extensive development of the red beds is typical. Gray detrital and coal-bearing deposits are also widespread. In the lower Permian of the southern continents glacial deposits (til-lites) are well developed. Lagoonal saline deposits are characteristic of the Permian. The deposits of Permian epicontinental seas are represented by carbonate formations—various limestones, including limestones of reef origin. Development of detrital terrigenous, carbonate, and siliceous volcanogenic formations was associated with the geosynclinal seas.

The organic world. The organic world of the Permian period saw an increase in the role of land animals and plants as a result of the expansion of land areas. In the course of the Permian, a number of groups of Paleozoic animals and plants became extinct, and new groups that were to reach their peak in the Meso-zoic appeared. Permian vegetation reflected the increased differentiation and growing aridity of the climate. Some plant groups that had been widespread earlier became extinct. This was true primarily of the arborescent lycopsids, of which only the sigillarids and a few other plants survived in the Permian. The arthrophytes, or joint-stemmed plants, continued to flourish —for example, the calamites, which became extinct in the late Permian, and the sphenophylis. Ferns and fernlike pterido-sperms were numerous and varied. An increase in the role of gymnosperms was characteristic. The cordaites were widespread but became extinct by the end of the Permian; conifers (Walchia, Ullmannia, and others) became important for the first time. Cycadophytes and ginkoes appeared. Mosses played a significant role in the plant cover. The rapid progress in development of gymnosperms in some places gave some floras of the second half of the Permian a mesophytic appearance. The replacement of paleophytic flora was completed at different times in different parts of the world. The wealth of land vegetation favored intensive coal accumulation. Calcareous green algae, some of which formed reefs, were widespread in the Permian seas. The algae bodies of fresh and brackish water were represented by various charophytes.

The fauna of the Permian was rich and varied. The seas had numerous and diverse foraminifers, especially fusulinids, which reached their peak and became extinct by the end of the period.

The coelenterates were represented primarily by tetracorals (Rugosa), which disappeared by the end of the Permian. Bivalve, gastropod, and cephalopod mollusks developed extensively. Foremost among the cephalopods were the ammonoids, represented primarily by the goniatites, which became extinct by the end of the period. During the middle of the Permian there appeared the ceratites, which reached their peak in the Triassic. The most common bryozoans were the cryptostomes, which often participated in the formation of reefs. The seas were inhabited by numerous brachiopods—productids and spiriferids predominated. The best known aquatic arthropods are the ostra-cods, which lived in the seas and lagoon and freshwater basins. Numerous phyllopods also inhabited the freshwater basins. A few trilobites existed in the seas. There were insects on land. The most common echinoderms were crinoids. The most widespread aquatic vertebrates were the cartilaginous sharklike fishes, among which the Helicoprion, with its unique spiral of teeth, was most interesting. The paleoniscids were typical of the bony fishes of the Permian. Terrestrial vertebrates (tetrapods) were represented by amphibians and reptiles. The stegocephalians were the dominant amphibians. The batrachosaurs, an intermediate group between the amphibians and reptiles, were typical. At the end of the Permian most of the stegocephalians became extinct. The reptiles reached great abundance and diversity. Cotylosaurs —primitive reptiles—were present, and theromorphs became widespread.

Biogeographic regionalization. The sharp differentiation of climate and the lack of connectedness of the sea basins promoted the isolation of flora and fauna and provided a basis for the identification of biogeographic regions and provinces. The following floristic regions have been established for the Permian with respect to the distribution of land flora: Euramerican (Europe, North America), which corresponds to an arid, tropical climate; Cathaysian (Southeast Asia), which is characterized by a moist tropical climate; Angaran, or Tunguskan, which was dominated by cordaites and corresponds to the northern temperate belt; and Gondwanan, which had glossopterid gymnosperms and represents the flora of the southern temperate belt. Three zoogeographic regions have been identified for the Permian sea basins: Boreal (northern polar), Tethys (tropical Mediterranean), and Notalian (southern polar). The Tethys region had the richest and most diverse fauna. Fusulinids and colonial corals were absent or rare in the polar regions, and complexes of brachiopods and ammonoids were depleted.

Permian deposits in the USSR. The geologic sections of the western slopes of the Urals and eastern part of the Eastern European Platform are the world standard for the Permian system. In the Cisuralic foredeep, the Asselian, Sakmarian, and Artinskian stages of the Lower Permian are represented by thick series of detrital rocks with subordinate amounts of limestone. Toward the west, these deposits are replaced by organogenic-detrital and reef limestones. Farther west, within the bounds of the Eastern European Platform, these limestones are replaced by thin limestones and dolomites. The Kungurian stage in the s-urals is composed of anhydrite, gypsum, and rock salt with interlayers of dolomites and detrital rocks. Above it is the Ufimian stage, which is represented by red beds of considerable thickness. The Kazanian and Tatarian stages are represented in their typical development within the boundaries of the Russian Plate. The Kazanian consists of marine, and in its upper part, lagoonal deposits—primarily carbonate—that are replaced by continental red beds in the Cisurals. The Tatarian stage is universally represented by continental red beds and deposits of diversified coloration. The thickness of Permian deposits on the Russian Plate ranges from 250 m in the west to 1,000 m or more in the east.

In the Alpide geosynclinal zone (the Caucasus and Middle Asia), the Permian is represented primarily by marine detrital-carbonate and volcanogenic formations. Marine Permian deposits are well developed in northeastern Siberia (the Verkhoiansk region), Primor’e Krai, Transbaikalia, and elsewhere. On the Siberian Platform, Permian deposits are widespread and are represented by continental coal-bearing and volcanogenic series breached by intrusions of basic magma (traps). Continental deposits of the Permian are present in the depressions of the Altai-Saian and Kazakhstan folded regions.

Minerals. Permian deposits are rich in minerals. The Permian coal accumulation was one of the greatest in earth history. The principal coal deposits in the USSR are in the Pechora, Kuznetsk, Minusinsk, and Tunguska basins; coal basins are also known in China and India and in the countries of Western Europe, North America, and the southern hemisphere. Pools of oil and natural gas in the USSR are concentrated in the Volga-Urals region and in the Pechora Depression, and considerable gas reserves exist in the Dnieper-Donets Depression. Oil and gas pools are also located in North America. Substantial reserves of rock and potash salts are found in the Lower Permian— primarily Kungurian—deposits of the Cisurals, the Caspian region, the northern Kama region, and the Donets basin. In Europe and North America, salt deposits are found primarily in the Upper Permian. Reserves of gypsum and anhydrite are contained in the Permian deposits of all salt-bearing basins. Copper and phosphorite are associated with Permian deposits. Numerous veined and contact ore deposits are associated with the intrusions that breach Permian deposits in the folded regions of the Urals, Kazakhstan, and the Tien-Shan.