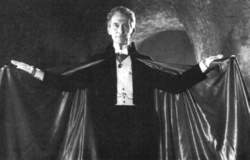 Peter Cushing usually portrayed a vampire hunter, but in Tender Dracula he played an actor named MacGregor who made his living in horror films.

Peter Cushing, a British movie actor known for his portrayal of Abraham Van Helsing, Dracula‘s main protagonist, was born in 1913 in Kenley, Surrey. His formal stage debut was in The Middle Watch in 1935 in a performance at Worthing, though he had done minor roles on stage previously. Cushing worked in 1936 as an assistant stage manager of the New Connaugh Theatre in Worthing, and moved on in 1937 to work as a stage actor in a repertory theater in Southampton. He made his film debut in 1939 in The Man in the Iron Mask, directed by James Whale. In 1941 he made Vigil in the Night and also made a number of short films in the 1940s as part of the war effort.

Following the war, Cushing moved between stage, movie and television roles; the most noteworthy acclaim coming in the 1954 British television production of 1984. He was, at the time, regarded as a major British TV star, being featured in productions like “Pride and Prejudice,” where he played Darcy.

In 1957 he starred as monster-maker Victor Frankenstein in the first of Hammer Films’ famous horror series. After the success of Curse of Frankenstein, Cushing teamed again with director Terence Fisher and opposite Christopher Lee in Hammer’s 1958 production of Dracula (better known under its American title as Horror of Dracula). As Van Helsing, Cushing assumed the image of a cultured intellectual who had chosen to confront absolute evil in the person of the vampire. He returned to the role of Van Helsing in one subsequent Hammer Dracula movie—The Brides of Dracula (1960)—and as a vampire-hunting descendant of Van Helsing in Dracula A.D. 1972 (1972) and The Satanic Rites of Dracula, released in the United States as Count Dracula and his Vampire Brides (1973). He also played a Van Helsing relative in the Hammer/Shaw co-production of The Legend of the Seven Golden Vampires (also known as The Seven Brothers Meet Dracula), which mixed horror and martial arts themes. As the only person to play Van Helsing so many times, Cushing has become the best-known actor associated with the role.

While Cushing became well known for his portrayal of Van Helsing, he was able to play a number of other parts, sometimes appearing in three or four movies a year, and had some success not only in vampire movies but also in a variety of others. He returned to his portrayal of Dr. Frankenstein in several Hammer films with the same theme. (Cushing ultimately played Frankenstein six times). He also played a Van Helsing-like role of an intellectual and/or scientist in horror movies that, when considered alongside his famous Van Helsing roles, reveal Cushing as having continually portrayed a symbol of a stable normal world that turned back the challenges of the chaotic forces of evil. This role was seen in its extreme form in Twins of Evil, (Hammer, 1971) in which he played a fanatical witchhunter who actually encountered the supernatural.

Above and beyond his Van Helsing roles, Cushing appeared in several other vampire films, including The Blood Beast Terror (1968), The Vampire Lovers (Hammer, 1970), Incense for the Damned (1970), and Tender Dracula (1974). He also teamed with Christopher Lee in several nonvampire movies such as The Creeping Flesh (1973) and The House of Long Shadows (1982), in which Lee, Cushing, and Vincent Price joined in a tribute to the gothic “old dark house” film. Possibly his most notable nonvampire appearance was as a villain, Grand Moff Tarkin, in Star Wars, though not to be forgotten was his highly successful role as Sherlock Holmes, the first appearance of Holmes in color. Cushing passed away on August 11, 1994.

Note: I am grateful to Uwe Sommerlad, a German movie expert and personal friend of Cushing, who read and commented on an earlier version of this entry.