the separation of the component parts, or fractions, of petroleum according to boiling point. Fractionation, which is performed in oil refineries, is the initial step in the refining of petroleum and in the production of petroleum products. The process is based on petroleum’s capacity to be heated to a vapor phase that differs in composition from the liquid phase (seeDISTILLATION). The fractions that are obtained are usually mixtures of hydrocarbons. Various individual hydrocarbons can be separated by repeated fractional distillations.

The refining industry uses equilibrium distillation combined with rectification of the vapor and liquid phases, a method that permits distillation of petroleum in plants that operate around the clock. The combination of rectification and equilibrium distillation also achieves a greater degree of accuracy in the separations and economizes on the amount of fuel that is consumed to heat the petroleum. The use of water vapor permits lower operating temperatures and results in higher yields as well as higher concentrations of high-boiling constituents in the residue.

In industrial installations petroleum is first distilled under atmospheric pressure and later under a vacuum (see Figure 1). In the atmospheric distillation stage the petroleum is heated to no more than 370°C, since higher temperatures cause cracking, or decomposition of hydrocarbons, which is to be avoided because the unsaturated hydrocarbons thus formed sharply reduce the quality and yield of the desired products. Distillation at atmospheric pressure results in fractions with boiling points that range approximately from 30° to 350°-360°C; mazut remains as the residue. These fractions contain many useful substances, including solvents, gasolines, diesel fuels, and jet engine propel-lants, as well as raw materials for petrochemical synthesis, including benzene, ethylbenzene, xylenes, ethylene, propylene, and butadiene. 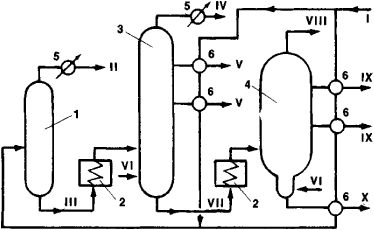 Mazut is further distilled under a vacuum with a residual pressure that can range from 5.3 to 8 kilonewtons per square meter, or from 40 to 60 torr; the vacuum reduces cracking of hydrocarbons to a minimum. In the USSR there are a number of oil refineries that include atmospheric-vacuum fractionation installations with production capacities of up to 8 million tons of petroleum per year.