Phantasm I | Article about Phantasm I by The Free Dictionary
https://encyclopedia2.thefreedictionary.com/Phantasm+I
Printer Friendly

(redirected from Phantasm I)
Also found in: Dictionary, Thesaurus, Medical. 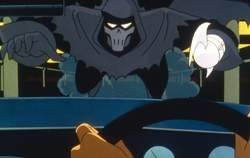 Phantasm, from the animated theatrical release Batman: Mask of the Phantasm (1993).

(pop culture)
An “Angel of Death” appears in Gotham City, a shrouded executioner with a skull-like faceplate, slicing through crimelords with a wrist-mounted scythe, then vanishing supernaturally into a wisp of fog. Batman is blamed for the murders, placing the Dark Knight in double jeopardy as he hunts down this vexing vigilante while evading an unremitting police force. Complicating his life is the return of Andrea Beaumont, the first love of the man behind the Bat-mask, Bruce Wayne. And thus begins one of Batman's most personal stories, his heart torn asunder by a flame that still flickers, and his flesh endangered by the blade of the merciless supervillain known as Phantasm. This most poignant of Batman stories … is a cartoon. Batman: Mask of the Phantasm, a 76-minute animated film directed by Eric Radomski and Bruce Timm, was released theatrically on Christmas Day 1993. A spin-off of television's Batman: The Animated Series (1992–1995), Phantasm was envisioned as a made-for-video feature but was upgraded to theatrical status shortly into its production (to producer Warner Bros.' chagrin; the movie performed poorly at the box office, but it later became a home-video favorite). Phantasm was inspired by the Reaper, the slayer in DC Comics' 1987 “Batman: Year Two” storyline. While not as graphic as comics' Reaper (to maintain the film's PG rating), Phantasm's screen presence was buttressed by atmospheric moodiness—the villain's emergence from and disappearance into the fog, plus eerie orchestral nuances by soundtrack composer Shirley Walker— that might have escaped the character had Phantasm originated on the comic-book page. Although the film's revelation (spoiler warning!) that Wayne's love interest Andrea (Dana Delany) was actually Phantasm surprised only the acutely naive (as well as a few little boys who bought the tie-in Phantasm action figure, removed its forbidding cloak, and gasped, “Hey, it's a girl!”), the exceptionally well-made, Art Deco-esque Mask of the Phantasm was, until the release of 2005's live-action Batman Begins, regarded by many Dark Knight devotees as the best Batman movie ever produced.
The Supervillain Book: The Evil Side of Comics and Hollywood © 2006 Visible Ink Press®. All rights reserved.