[′fāz ¦plān ə′nal·ə·səs]
(control systems)
A method of analyzing systems in which one plots the time derivative of the system's position (or some other quantity characterizing the system) as a function of position for various values of initial conditions.
McGraw-Hill Dictionary of Scientific & Technical Terms, 6E, Copyright © 2003 by The McGraw-Hill Companies, Inc.
The following article is from The Great Soviet Encyclopedia (1979). It might be outdated or ideologically biased.

where x and y are the state variables of the system, P(x, y) and Q(x, y) are functions that satisfy the conditions for the existence and uniqueness of solutions, and t is time—the independent variable. The behavior of such a system may be represented geometrically in a plane in rectangular Cartesian coordinates. In such a representation, a point in the xy-plane uniquely corresponds to each state of the dynamic system; conversely, one and only one state of the dynamic system being analyzed corresponds to each point in the plane. The plane Oxy is called the phase plane. A 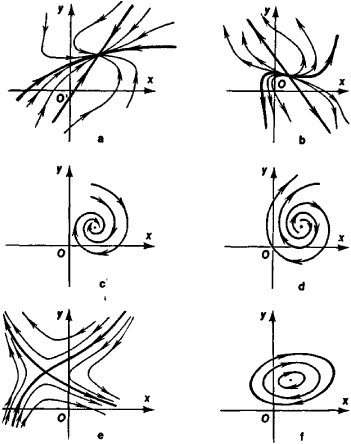 The following three types of phase trajectories are usually distinguished in a phase plane: singular points, or equilibrium positions, which are determined by solving the system of equations P(x, y) = 0, Q(x, y) = 0; isolated closed trajectories, which correspond to periodic motions in the system; and separatrices, which divide the phase plane into regions occupied by different types of trajectories. 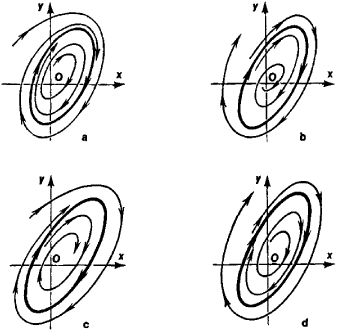 In combination with analytical methods, phase plane analysis makes it possible to obtain quantitative estimates of the solutions of the differential equations that describe a dynamic system. For example, phase plane analysis may be used to estimate the time required for a phase point to undergo a transition from one state to another—that is, to estimate the duration of a transition process—or to determine the period and “amplitude” of a periodic motion.