[′fāz ¦shift ‚sər·kət]
(electronics)
A network that provides a voltage component which is shifted in phase with respect to a reference voltage.
McGraw-Hill Dictionary of Scientific & Technical Terms, 6E, Copyright © 2003 by The McGraw-Hill Companies, Inc.
The following article is from The Great Soviet Encyclopedia (1979). It might be outdated or ideologically biased. 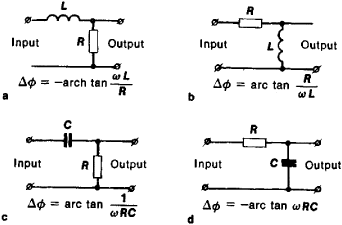 The simplest phase-shift circuits consist of four-terminal L networks containing either a reactive component and a resistor or two reactive components of different kinds (Figure 1). Such circuits are usually used to introduce a fixed phase shift into a transmission channel carrying signals at frequencies specified for mains used by industry or at radio frequencies (up to the meter wavelength range). Phase-shift circuits are of great practical importance in radio engineering. They are used to change the wave form of input signals (in differentiating and integrating devices), to compensate for phase distortion, and to produce phase modulation.

Feedback
Flashcards & Bookmarks ?
Please log in or register to use Flashcards and Bookmarks. You can also log in with
Flashcards ?
My bookmarks ?
+ Add current page to bookmarks
Mentioned in ?
References in periodicals archive ?
Atwater, "Reflection Coefficient Transformations for Phase-shift Circuits," IEEE Transactions on Microwave Theory and Techniques, Vol.
A design procedure for a circular polarized, nearly square patch antenna