Measurement of the time delay between two periodic signals. The phase difference between two sinusoidal waveforms that have the same frequency and are free of a dc component can be conveniently described as shown in the illustration. It can be seen that the phase angle can be considered as a measure of the time delay between two periodic signals expressed as a fraction of the wave period. This fraction is normally expressed in units of angle, with a full cycle corresponding to 360°. For example, in the illustration, where the voltage v1 passes through zero cycle before a second voltage v2, it leads by 360°/8 or 45°. Phase angle is usually defined from the fundamental component of each waveform; therefore distortion of either or both signals can give rise to errors, the extent of which depends on the nature of the distortion and the method of measurement. 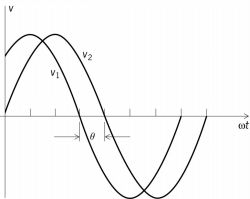 The majority of modern phase-measuring devices are based on the use of zero-crossing detectors. The time at which each signal crosses the zero-voltage axis is determined, usually by means of a squaring-up circuit (for example, an overdriven amplifier) followed by a high-speed comparator. This produces, in each channel, a trigger pulse that is used to drive a bistable flip-flop. The output from the bistable is a rectangular wave, the duty cycle of which is proportional to the phase difference between the input signals. If this signal is integrated by means of a suitable filter, a dc voltage is produced that is an analog representation of the phase angle. This voltage is then displayed on a panel meter (analog or digital) suitably scaled in degrees or radians. Instrumentation using this principle is capable of measuring phase differences to approximately ±0.05° over a wide range of amplitudes and frequencies.

Conventional phase meters have an upper frequency limit of a few hundred kilohertz. This limit is imposed mainly by the ability of the arrangement consisting of a comparator and a flip-flop to maintain a clean and precise rectangular waveform under conditions of high-speed operation. In order to measure phase angle at frequencies between about 100 kHz and several gigahertz, it is necessary to down-convert the radio-frequency signals to a frequency that can be handled correctly by the phase meter. At microwave frequencies, instruments such as slotted lines, air lines, and vector network analyzers are also used for phase-angle measurements. See Microwave measurements

Feedback
Flashcards & Bookmarks ?
Please log in or register to use Flashcards and Bookmarks. You can also log in with
Flashcards ?
My bookmarks ?
+ Add current page to bookmarks
Mentioned in ?
References in periodicals archive ?
The phase-angle measurement also provides a great deal of information.
Precision Location and Identification: A Revolution in Threat Warning and Situational Awareness