An array of separate radio elements, such as dipoles or dish antennas, connected together so as to behave as one large antenna. The beam of the array can be steered across the sky by adjusting the relative phases of signals from the elements. The adjustment does not involve mechanical movement and can be done very quickly, making the technique particularly useful for terrestrial radar. Radio interferometers such as the VLA are sometimes configured as sensitive phased arrays to detect weak transmissions from distant space probes.

an antenna array in which the phases or phase shifts of the waves emitted or received by the radiating elements are controlled.

Phase control, or phasing, makes it possible to form the requisite radiation pattern—for example, a beam—with a large variety of radiator arrangements, to vary the beam direction of a fixed array, and to perform rapid—and in some cases, practically inertialess—scanning (for example, seeSCANNING). The shape of the radiation pattern can be controlled within given limits; that is, the beam width and side-lobe level can be varied. For this purpose, the amplitudes of the waves from individual radiators in a phased array are sometimes also controlled. These and certain other properties of phased arrays, together with the possibility of using computers and present-day means of automation to control the arrays, are the reasons why such arrays are both promising and widely used in, for example, radio communication, radar, radio navigation, and radio astronomy. Phased arrays with a large number of controlled elements—sometimes 104 or more elements—are components of various ground-based (both fixed and mobile), shipborne, airborne, and spaceborne radio devices. Much research is being carried out to develop further the theory and technology of phased arrays and to extend the use of the arrays.

Structure. The shapes, sizes, and designs of present-day phased arrays are highly diverse. The differences are defined by both the type of radiators used and the way in which the radiators are arranged (Figure 1). The sector scanned by a phased array is determined by the radiation pattern of the array’s radiators. Low-gain radiators are usually employed in phased arrays in which the beam is rapidly swept through a wide angle. The radiators may be symmetrical or asymmetrical dipoles, frequently with one or more reflectors—for example, as a common reflector for an entire array. They may also be the open ends of wave guides or slot, horn, helical or spiral, dielectric-rod, log-periodic, or other antennas. Large phased arrays sometimes consist of individual small arrays called modules; the radiation pattern of the modules is directed in the same direction as the main beam of the entire array. Mechanically steerable high-gain antennas—for example, fully steerable reflectors—are used as radiators in many cases, such as when slow beam steering is permissible. In such arrays, beam steering is accomplished by steering all the antennas and phasing the radiated waves; phasing of the antennas makes it possible to steer the beam rapidly within the limits of the radiation pattern of the antennas.

Depending on the required pattern shape and the requisite three-dimensional scanning sector, various arrangements of the radiating elements are used. The elements may be arranged along a straight line or an arc, in a given volume, or over a flat, cylindrical, or spherical surface. Phased arrays in which the elements are arranged on a flat surface are called planar arrays; if the elements are arranged in a given volume, the arrays are known as volume arrays. The shape of a phased array’s radiating surface, or aperture (seeRADIO WAVES, RADIATION AND RECEPTION OF), is sometimes determined by the configuration of the object on which the array is mounted—for example, by the shape of an artificial earth satellite. Phased arrays with an aperture shaped like a given object are sometimes called conformal arrays.

Planar phased arrays are widely used; in such arrays, the beam may scan from the direction perpendicular to the plane of the aperture—as in a broadside array—to the direction parallel to the plane of the array—as in a traveling-wave antenna. The front-to-back ratio of a planar phased array decreases when the beam is steered away from the direction perpendicular to the plane of the aperture. To provide for wide-angle scanning—that is, for scanning through large solid angles of up to 4π steradians—without a substantial decrease in the front-to-back ratio, a phased array with a nonplanar aperture, such as a spherical aperture, or a system of planar arrays oriented in different directions is used. In such systems, scanning is accomplished by exciting and phasing appropriately oriented radiators.

Phase-shift control. Depending on the method used to vary the phase shifts, phased arrays are classified as electromechanically scanned, frequency-scanned, or electrically scanned. Electromechanical scanning is accomplished, for example, by changing the shape of the exciting wave guide (Figure 2, a). Frequency scanning exploits the frequency dependence of the phase shifts, which is caused by, for example, the length of the feeder between adjacent radiators (Figure 2, b) or the wave dispersion in the wave guide. Electrical scanning is accomplished by means of phase-shift circuits or phase shifters, which are controlled by electronic signals (Figure 2, c) with a continuous or discrete phase-shift variation.

Electrically scanned phased arrays are the most versatile arrays. They provide various phase shifts and change the phase shifts at a considerable speed with relatively low power losses. Ferrite and semiconductor phase shifters, which operate in time intervals of the order of microseconds and have power losses of about 20 percent, are widely used in present-day phased arrays at microwave frequencies. The operation of the phase shifters is controlled by a high-speed electronic system that, in the simplest cases, controls a group of elements, for example, the rows and columns in a planar array with a rectangular arrangement of the radiators; in more complicated cases, each phase shifter is controlled separately. The beam may be steered in three dimensions either in accordance with a previously specified law or in accordance with a program that is elaborated during the operation of 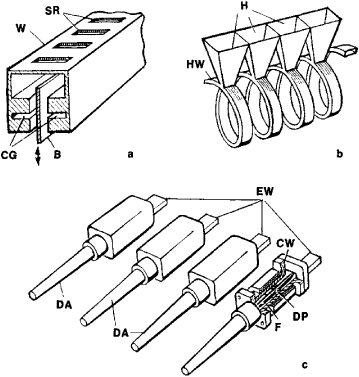 the overall radio device of which the array is a component.

Design features. The radiators in a phased array are excited (Figure 3) by means of either feeder lines or free space waves. Quasi-optical phased arrays use free space waves. The exciting feeder circuits sometimes contain both phase shifters and complicated electrical devices called pattern-forming circuits, which excite all the radiators from several inputs so that scanning beams corresponding to the inputs may be simultaneously produced in three dimensions, as in multibeam phased arrays. Essentially two types of quasi-optical phased arrays are distinguished: lenses and reflectors. In lenses, the phase shifters and radiators are excited, with the aid of secondary radiators, by waves emitted from a common exciter. In reflectors, the main and secondary radiators are integrated, and the reflectors are mounted at the phase-shifter outputs. Multibeam quasi-optical phased arrays contain several exciters, each of which corresponds to a three-dimensional beam. In some cases, focusing devices, such as reflectors or lenses, are used to form the radiation pattern. The phased arrays discussed above are sometimes called passive arrays. 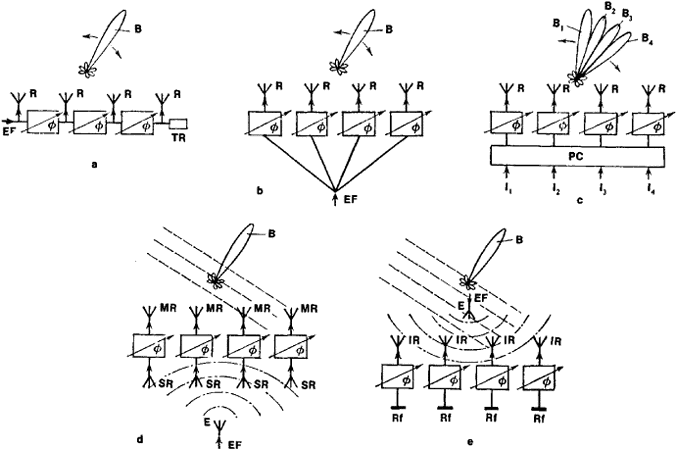 Active phased arrays offer the greatest possibilities for control. In such arrays, a transmitter or receiver that is controlled with respect to phase or sometimes amplitude is connected to each radiator or module (Figure 4). The phase of active arrays may be controlled in the intermediate-frequency channels or in the exciting circuits of, for example, coherent transmitters or local oscillators. Thus, the phase shifters in active arrays may operate in wavelength ranges that differ from the antenna’s frequency band. In many cases, the power losses in the phase shifters have no direct effect on the main signal level. Active transmitting phased arrays make it possible to combine in space the power radiated by the coherent electromagnetic waves excited by the individual transmitters. In active receiving phased arrays, the joint processing of the signals received by the individual elements makes it possible to obtain more complete information about the sources of the radiation.

As a result of the direct interaction between the radiators, the characteristics of a phased array, such as the matching of the radiators and feeders and the front-to-back ratio, change as the beam is steered. Special methods of compensating for the mutual impedance between the elements of a phased array are sometimes used to prevent the harmful effects of the mutual impedance.

(1) the widespread introduction of phased arrays with a large number of elements into radio devices and the development of new types of elements, particularly for active arrays;

(2) the development of methods for building large-aperture phased arrays, including unequally spaced arrays with high-gain antennas distributed over an entire hemisphere of the earth, thus yielding a global radio telescope;

(3) the further development of methods and techniques for reducing the harmful effects of mutual impedance between the array elements;

(4) the development of a design theory and of methods for computer designing of phased arrays;

(5) the development of a theory and the introduction into practice of new methods of processing the information received by the elements of a phased array and using the information to control the array, especially for the automatic phasing of the elements, as in self-phasing array systems, or for varying the shape of the radiation pattern, for example, by reducing the side-lobe level in the directions of sources of interference, as in adaptive array systems;

(6) the development of control methods for the independent steering of the individual beams in multibeam phased arrays.

[′fāzd ə′rā]
(electromagnetism)
An array of dipoles on a radar antenna in which the signal feeding each dipole is varied so that antenna beams can be formed in space and scanned very rapidly in azimuth and elevation.

Feedback
Flashcards & Bookmarks ?
Please log in or register to use Flashcards and Bookmarks. You can also log in with
Flashcards ?
My bookmarks ?
+ Add current page to bookmarks
TheFreeDictionary presents:
Write what you mean clearly and correctly.
Mentioned in ?
References in periodicals archive ?
The European multifunction phased-array C-band shipboard radar is being built by Alenia (Italy) with the participation of Marconi Co.
Major advances in phased arrays
At a press conference held recently at Raytheon's Advanced Devices Center (ADC) in Andover, MA, company officials revealed that the active phased-array antennas will use the same gallium arsenide monolithic microwave integrated circuit (MMIC) technology that the ADC is implementing in the US Army Space and Strategic Defense Command's Ground-based Radar (GBR) program.
Raytheon finds commercial communications use for MMIC technology
Modern phased-array antennas combine large apertures, wide field-of-view and wide bandwidths.
Big or little, real or virtual: the diversity of antennas
Chapter 7 deals with phased-array technology and its application to airborne intercept radar.
Airborne Pulsed Doppler Radar, 2nd ed
This VGA, phase shifter and switch chip set is integrated with the electronic control on one substrate to form a universal module for active phased-array applications.
A MMIC variable-gain amplifier for Tx/Rx applications
The two-element phased-array handset, shown in Figure 2, consists of two stacked radiating elements (such as quadrifilar helix antennas), a two-bit phase shifter and supporting circuitry to control and select the optimum phase setting.
A two-element phased-array antenna for reducing multipath effects in hand-held SATCOM units
This paper presents phased-array antenna performance predictions to help position an antenna on an aircraft.
Coverage analysis of airborne SATCOM phased-array antennas
Packaging is the largest technology challenge in realizing affordable, high performance EHF communication phased-array antennas for mobile SATCOM operation.
A connectorless module for an EHF phased-array antenna