[¦fōd·ə¦graf·ik ri′kȯrd·iŋ]
(communications)
Facsimile recording in which a photosensitive surface is exposed to a signal-controlled light beam or spot.
McGraw-Hill Dictionary of Scientific & Technical Terms, 6E, Copyright © 2003 by The McGraw-Hill Companies, Inc.
The following article is from The Great Soviet Encyclopedia (1979). It might be outdated or ideologically biased.

(optical recording), the use of photographic methods to record electrical signals that carry information about sound and/or images.

A photographic film (still or motion-picture), plate, or some other material may serve as the carrier in the recording system, and the recording is produced by a light or electron beam. During the recording process, the carrier may be moved relative to the stationary beam, or the recording beam may be displaced relative to the stationary carrier. The intensity or shape of the beam incident on the carrier is varied to correspond with the recorded signal. Subsequent photographic processing (development and fixing) produces a signal track, on which the coded signal is registered in the form of corresponding alterations in the optical density or reflection coefficient of the various sections of the carrier. Various photographic recording systems may use incoherent light (a light beam without spatial coherence), an electron beam, or coherent light (a laser beam).

Photographic recording with incoherent light is the most common system type. It is used for sound recording, for example, in making sound films, as well as for recording television images from the screen of a kinescope; the latter process is used by television studios to store television programs. In practice, photographic recording with incoherent light is primarily used in systems that modulate a line recorded on the carrier by means of an electromechanical modulator with a moving mirror, which is controlled by a permanent-magnet device; such systems use an external light source of constant intensity.

As shown in Figure 1, an optical image of a diaphragm with a narrow rectangular slit is produced on the carrier, such as a motion-picture film, by means of an objective lens. In turn, an optical image of a diaphragm with an M-shaped aperture, illuminated by a recording lamp, is formed in the plane of the first diaphragm by means of an imaging lens, a mirror, and condenser lenses. As the mirror oscillates to correspond with changes in the recorded signal, the image of the M-shaped aperture oscillates relative to the narrow slit, which results in a change in the width of the non-illuminated sections of the carrier. The sound track obtained after the film is developed is called a bilateral variable-area photographic sound track. 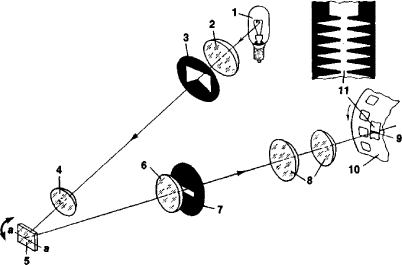 Advantages of systems using electron beams and coherent light rather than incoherent light include higher quality in recording high frequencies and greater density in the recorded signal. For this reason further development of such systems shows more promise for image recording.

Feedback
Flashcards & Bookmarks ?
Please log in or register to use Flashcards and Bookmarks. You can also log in with
Flashcards ?
My bookmarks ?
+ Add current page to bookmarks
Mentioned in ?
References in periodicals archive ?
Made mainly in Manhattan public spaces using (with one exception) black-and-white film stock, these silent, polished shards--doubly excavated for having been transferred from 16 mm to digital video--are pure photographic recording. There is (with one exception) no mediation of the image; the films express the elemental, late-nineteenth-century fascination with "motion pictures." Indeed, Gehr titled his twelve-minute consideration of the subway Workers Leaving the Factory after the well-known Lumiere brothers actualite.
Metro pictures: J. Hoberman on Ernie Gehr
I wish the "discourse" on the medium of the last fifteen years had picked up on the "incidental" in photographic recording, the value of which is crucial and ambiguous.
Critical reflections