a measure used to reproduce photometric units. The following have been used at various times as standards: 1 cm2 of a platinum surface at the solidification temperature; electric incandescent lamps; and the flame of a candle or lamp with specified characteristics, such as the fuel and the dimensions of the flame. A distinction is made between a primary and a secondary photometric standard. 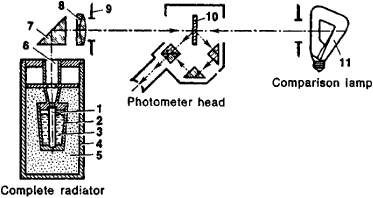 Figure 1. Apparatus of primary standard of light: (1) sight tube made of fused thorium oxide (ThO2), whose temperature is maintained at 2042°K, the solidification temperature of platinum; (2) crucible of fused ThO2 containing chemically pure paltinum (3); (4) quartz vessel containing a charge (5) of ThO2; (6) sight tube aperture; (7) reflecting prism; (8) lens, which creates an image of the luminous aperture of the radiator on the white diffuse screen (10); (9) diaphragm; (11) comparison lamp, which illuminates the other side of the screen (10). The platinum in the crucible is heated by means of a high-frequency induction furnace (the melting point of ThO2 is greater than 2042°K). By adjusting the distances between the photometer head, the complete radiator, and the comparison lamp, the illuminances on both sides of the screen (10) can be equalized. A photocell is often used instead of the screen; the photocell is illuminated alternately by the primary and secondary standards.

The primary standard for the unit of luminous intensity—the candela (cd)—is a complete, or blackbody, radiator at the solidification temperature of platinum. This standard is known as the primary standard of light. It is constant and is reproducible on the basis of the laws of thermal radiation. The apparatus consists of a small refractory sight tube immersed in metal that is heated by high-frequency currents (see Figure 1). This standard was developed in the USA and was adopted by an international agreement on Jan. 1, 1948; it is realized in eight national laboratories. The luminance of the standard is 6 X 105 cd/m2; the magnitudes of the luminance obtained in the various national laboratories differ by no more than ± 0.6 percent, and the error within an individual laboratory is ± 0.2 percent.

The secondary standards for the units of luminous intensity, illuminance, and luminous flux consist of groups of incandescent lamps of different designs and different color temperatures.

Feedback
Flashcards & Bookmarks ?
Please log in or register to use Flashcards and Bookmarks. You can also log in with
Flashcards ?
My bookmarks ?
+ Add current page to bookmarks
Mentioned in ?
References in periodicals archive ?
By using filters it is possible to transform your measured magnitudes to photometric standard magnitudes, and to deduce the colour as well as the magnitude of an object.
CCD and spectroscopic observations of Nova Cephei 2013
UBVRI photometric standard stars around the celestial equator.
WORDS: flux calibration, infrared, photometric standards.
Mid-Infrared spectrophotometric calibration for the new generation of large telescopes: A solution to the problem of calibrating data reliably
Naval Observatory in Flagstaff, Arizona, who is well known to amateurs involved in photoelectric photometry, created TASS's lists of photometric standard stars with that observatory's 1-meter transit telescope.
Boldness: The Amateur Sky Survey
In order to plot CMDs for each cluster, we needed to convert the instrumental magnitudes, b and v, for each star to apparent magnitudes, B and V, on the Johnson UBV photometric standard system.
CCD BV photometry of three southern galactic open clusters using Faulkes telescope south
Photometric Standards for Corrosion Control in the Department of Defense--Maria Nadal, National Institute of Standards and Technology
ACA to host 2010 International Marine and Offshore Coatings ACSeries Conference
Technology Insights on page 14 introduces one company's latest photometric standards for use with UV/Vis Spectrophotometers or Colorimeters.
Setting high standards
Supplied worldwide to major airports and privately-owned airfields, it conforms to all international photometric standards relating to portable airfield lighting.
METALITE
Once adopted by the scientific establishment, this technology offers the prospect of a more economical and reliable method of maintaining photometric standards.
The candela and photometric and radiometric measurements
In-Spec Photometric Standards for use with UV/Vis Spectrophotometers or Colorimeters are GFS Chemicals newest standards available.
Current market for the In-Spec Photometric standards is anyone with a UV/Vis Spectrophotometer or Colorimeter.
GFS Chemicals, Inc
Landolt's UBVRI Photometric Standards Around the Celestial Equator), though a few are unabashedly general (such as Dorrit Hoffleit and Wayne H.
A star catalog menagerie