a survey of localities, open pits, engineering structures, or other objects, made with the help of a phototheodolite and instruments for the photogrammetric analysis of photographs. The photographs P1, and P2 of an object are obtained from a phototheodolite stationed at the ends S1 and S2 of the base line (Figure 1). The coordinates of individual points are determined from the photographs with the aid of a stereocomparator or stereoautograph, and a numerical model or map of the object is then produced. The orientation of a photograph, for example, P1, at the moment the photograph is made is determined by the elements of relative orientation (the focal length f of the camera and the coordinates x0, z0 of the principal point O1) as well as by the elements of absolute orientation (the coordinates XS1, YS1, ZS1 of the center of projection S1 in the system OXYZ and the angles α1, ω1, κ1).

BX, BY, and BZ are the projections of the base line B on the coordinate axes; X1’, Y1’, Z2’ and X2’, Y2’, Z2’ are the coordinates of the points m1 and m2 in systems S1XYZ and S2XYZ parallel to OXYZ, calculated from the formulas

Here, x and z are the plane coordinates of a point on the photograph in the system O1’ x1z1 or O2’ x2z2; ai, bi, ci are direction cosines determined by the angles α, ω, and κ For the parallel case, the formulas in (1) assume the form

and for the normal case

Phototheodolite surveys are also widely used to solve problems in other fields of science and engineering: in geography, for studying glaciers and the process of snow accumulation on avalanche-prone slopes; in forest management and agriculture, for determining forest valuation characteristics and studying soil erosion; 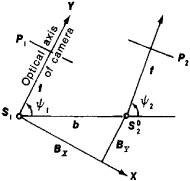 in construction engineering, for surveying, designing, building, and operating various structures; and in architecture, for studying the features of structures and monitoring the condition of architectural ensembles, individual buildings, and ancient monuments. Such surveys are also used in industry to check the installation of turbine housings and rolling mills and to determine the condition of smokestacks, in the study of rivers, seas, and oceans to map the surfaces and floors of large bodies of water, and in space research to study the surface of the earth, moon, and other heavenly bodies from artificial earth satellites and spacecraft.