Also found in: Dictionary, Medical.
The following article is from The Great Soviet Encyclopedia (1979). It might be outdated or ideologically biased. 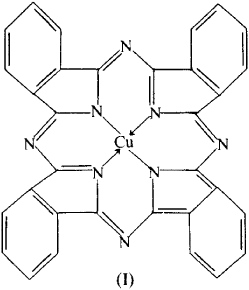 The polymorphism of phthalocyanine dyes is important for their use: for example, (I) has α-, β-, and γ-modifications, which differ substantially in color and stability in organic solvents.

Copper phthalocyanine (I) is obtained by heating phthalic anhydride with urea, cuprous chloride (CuCl), and a catalyst, such as As2O5, at 160°–200°C in a medium of trichlorobenzene or nitrobenzene. It is also obtained by heating phthalonitrile, C6H4(CN)2, with CuCl, in which case a partially chlorinated light-blue pigment is formed. To obtain the α- and γ-forms, (I) is dissolved and reprecipitated from 98-percent and 60-percent sulfuric acid, respectively; preparation of the β-form involves the mechanical grinding of (I) in the presence of organic solvents and sodium chloride or sodium sulfate.

Turquoise-colored reactive dyes are synthesized by the action of chlorosulfonic acid and thionyl chloride on (I), followed by the conversion of the tetrasulfochloride obtained to sulfamide by interaction with aromatic amines containing active groups. Water-soluble phthalocyanine dyes, called Alcians, are isothiouronic salts of (I) and contain one to three of the following group:

They are prepared by first subjecting (I) to the action of paraformaldehyde and hydrochloric acid and then to the action of tetramethyl thiourea; when applied to fabric these phthalocyanine dyes, after steam treatment, form a pigment in the pores of the fiber. Another method of obtaining phthalocyanine dyes during the dyeing process is by the interaction of l-amino-3-iminoisoindoline [phthalocyanogen, or phthalogen (II)] with copper salts in the presence of organic solvents; a fast pigment is formed on heating the fabric impregnated with this mixture to 120°–150°C.

The central fragments of phthalocyanine dyes and biological pigments—hemoglobin and chlorophyll—have similar structures.