Pickford, Mary, 1893–1979, American movie actress, b. Toronto, Ont. In 1909 she began working with D. W. Griffith. Specializing in playing young girls, she was dubbed “America's Sweetheart.” Her films include A Poor Little Rich Girl (1917), Pollyanna (1919), Little Lord Fauntleroy (1921), and Tess of the Storm Country (1922). In 1919 she cofounded the distribution firm United Artists with Griffith, Charlie Chaplin, and Douglas Fairbanks, her husband. She produced her own films thereafter. She won an Academy Award for Coquette (1929), her first movie with sound. She retired from acting in 1933, but continued to produce films for United Artists. 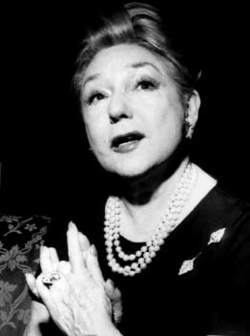 Mary Pickford rose to fame as an actress in silent films. She is pictured shortly before her death in 1979. Central Press/Getty Images.

Born Gladys Marie Smith, silent movie actress Mary Pickford was the oldest of three children born within four years of each other. Her mother was Charlotte; her sister was Lottie and the youngest brother was Jack. Gladys was born April 8, 1892. She was five when her father was killed in an accident at work. To help bring in money, Charlotte rented out a room in their house. The couple who rented it were producing a play and thought that Gladys would be ideal for a part in it. Eventually the whole family became actors.

When Gladys was thirteen she was cast in a play, The Warrens of Virginia, by Broadway producer David Bedalsco, who changed her name to Mary Pickford. She was taken on a tour of the dressing rooms at the theatre and at the leading lady’s—Frances Starr—she had a premonition that one day she would have that same dressing room, complete with the star on the door. In fact she did; when she headlined in Bedalsco’s A Good Little Devil.

Pickford had a similar premonition one day when standing with her cousin, waiting in the rain for a trolley car. A passing limousine splashed both of them and Pickford had a premonition that one day she would be riding in an even grander vehicle. Six years later she gave the same cousin a ride in her new cream and gray Cadillac.

Once when shooting a picture at sea (Pride of the Clan), the fishing boat in which a scene was being filmed started to sink. There was a lifeboat nearby and everyone was told to evacuate to it. Pickford decided to run below decks and get her makeup kit but just as she started to do so, she heard a clairaudient voice tell her “Don’t you go there!” She turned and immediately got into the lifeboat. It is probable that if she had continued below deck she might well have gone down with the fishing boat.

After her mother died, Mary Pickford regularly saw her in her dreams. She was tempted to try to make contact through a medium but felt that her deeply religious mother might object to that. In her memoirs, Pickford wrote, “It wasn’t long after her passing that I began meeting mother in my dreams … To this day I still see [her] in my dreams … It gives me infinite peace to know that as long as I dream I shall have my mother with me.”

When only fourteen, Pickford was touring New Haven, Connecticut, with a play, and went to a park near Yale University. As she walked along, she had a strong feeling that she might see the face of the man she would eventually marry. She said, “Always in my heart I carried a picture of what he would look like. I knew everything about him, his complexion, his eyes, his voice.” Many years later, after two marriages (one long and happy one to Douglas Fairbanks), she finally met the man. It was Charles Edward Rogers, better known as Buddy Rogers. Rogers, who was eleven years younger than Pickford, had been in love with her for many years. They met in 1927. She finally divorced Fairbanks in 1936, and she and Rogers married the following year. She remained married to Rogers for the rest of her life. She died of cerebral hemorrhage on May 29, 1979.

Pickford, who began performing in the theater in 1898, made her film debut in 1909. Her best roles were directed by the producer D. W. Griffith. The image of the ingenue, the American Cinderella, created in Pickford’s roles became internationally famous. Pickford was especially popular for her performances in the films The New York Hat (1912), The Poor Little Rich Girl (1916), The Little Princess (1917), Pollyanna (1920), and My Best Girl (1927). She was the founder and owner of many film companies, including United Artists, a joint venture with Griffith, Chaplin and D. Fairbanks. She made her last film in 1933, resumed her career in the theater, and became a producer. Pickford has written an autobiography.

(1893–1979) film actress; born in Toronto, Canada, (wife of Douglas Fairbanks Sr.). Her stage debut was made at age five, and her film debut was in 1909. Her childlike charm, her golden curls, and her feminine wiles turned her into "America's Sweetheart." She played Cinderella parts until her retirement in 1933. A cofounder of United Artists, she won an Academy Award for Coquette (1929).
The Cambridge Dictionary of American Biography, by John S. Bowman. Copyright © Cambridge University Press 1995. Reproduced with permission.