[pē¦ā·zō·ə′lek·trik tranz′dü·sər]
(electronics)
A piezoelectric crystal used as a transducer, either to convert mechanical or acoustical signals to electric signals, as in a microphone, or vice versa, as in ultrasonic metal inspection.
McGraw-Hill Dictionary of Scientific & Technical Terms, 6E, Copyright © 2003 by The McGraw-Hill Companies, Inc.
The following article is from The Great Soviet Encyclopedia (1979). It might be outdated or ideologically biased.

a measuring transducer that converts mechanical stress into an electric signal. Its operation is based on the piezoelectric effect. One of designs of a piezoelectric pressure transducer is shown in Figure 1. Under the action of the pressure being measured, electric charges appear on the external and internal sides of a pair of plates made of a piezoelectric material. The total electromotive force between the output terminal and the housing varies in proportion to the pressure. 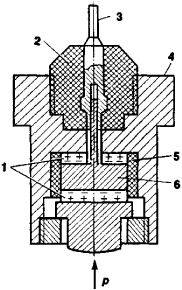 Piezoelectric transducers are well suited for measuring rapidly varying pressures. When the pressure varies slowly, however, there is an increase in error due to leakage of electric charge from the plates to the housing. The error can be reduced by connecting an additional capacitor in parallel to the transducer, but this reduces the voltage at the output terminals. The main advantages of piezoelectric transducers are their high dynamic characteristics and their ability to sense pressure oscillations at frequencies from tens of hertz to tens of megahertz. Piezoelectric transducers are used in the measurement of strain, vibration, and deformation; they also find application in apparatus for weighing and for sorting according to weight.