, piezoelectricity
Physics
a. the production of electricity or electric polarity by applying a mechanical stress to certain crystals
b. the converse effect in which stress is produced in a crystal as a result of an applied potential difference
Collins Discovery Encyclopedia, 1st edition © HarperCollins Publishers 2005

Quantitative theories based on the detailed crystal structure are very involved. Qualitatively, however, the piezoelectric effect is readily understood for simple crystal structures. The illustration shows this for a particular cubic crystal, zincblende (ZnS). Every Zn ion is positively charged and is located in the center of a regular tetrahedron ABCD, the corners of which are the centers of sulfur ions, which are negatively charged. When this system is subjected to a shear stress in the xy plane, the edge AB, for example, is elongated, and the edge CD of the tetrahedron becomes shorter. Consequently, these edges are no longer equivalent, and the Zn ion will be displaced along the z axis, thus giving rise to an electric dipole moment. The dipole moments arising from different octahedrons sum up because they all have the same orientation with respect to the axes x, y, and z.

The sharp resonance curve of a piezoelectric resonator makes it useful in the stabilization of the frequency of radio oscillators. Quartz crystals are used almost exclusively in this application. In vacuum-tube oscillators, the crystal generally is part of the feedback circuit. Selective band-pass filters with low losses can be built by using piezoelectric resonators as circuit elements. A synthetic piezoelectric crystal which is often substituted for quartz in this application is ethylene diamine tartrate.

Piezoelectric materials are used extensively in transducers for converting a mechanical strain into an electrical signal. Such devices include microphones, phonograph pickups, vibration-sensing elements, and the like. The converse effect, in which a mechanical output is derived from an electrical signal input, is also widely used in such devices as sonic and ultrasonic transducers, headphones, loudspeakers, and cutting heads for disk recording.

The principal piezoelectric materials used commercially are crystalline quartz and rochelle salt, although the latter is being superseded by other materials, such as barium titanate. Quartz has the important qualities of being a completely oxidized compound (silicon dioxide), and is almost insoluble in water. Therefore, it is chemically stable against changes occurring with time. It also has low internal losses when used as a vibrator. Rochelle salt has a large piezoelectric effect, and is thus useful in acoustical and vibrational devices where sensitivity is necessary, but it decomposes at high temperatures (131°F or 55°C) and requires protection against moisture. Barium titanate provides lower sensitivity, but greater immunity to temperature and humidity effects. Other crystals that have been used for piezoelectric devices include tourmaline, ammonium dihydrogen phosphate (ADP), and ethylenediamine tartrate (EDT).

The first detailed investigation of piezoelectric effects was conducted in 1880 by the brothers Jacques and Pierre Curie on quartz crystals. Later on, piezoelectric properties were found in more than 1,500 substances, including the widely used Rochelle salt and barium titanate.

Figure 1. Planar model of a crystal lacking a center of symmetry: (a) The centers of gravity of the positive and negative charges coincide; the arrows indicate the separate electric dipole moments of a group of charges. (b) A compressive stress changes the distances between the charges but does not change the angles; the horizontal arrow pointing to the left represents the resultant electric dipole moment of a group of charges. 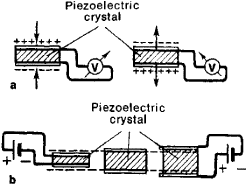 It has one value, d, when the charge on the capacitor plates is kept equal to zero (Figure 3) and a different value, d’, when the capacitor plates are short-circuited; that is, E = 0. For this reason, it is expedient to rewrite the relationship P = d σ as, for example, P = d’ σ + KE. The values of d and d’ are related by the expression d’ = d∈, where ∈ is the dielectric constant of the crystal.

Feedback
Flashcards & Bookmarks ?
Please log in or register to use Flashcards and Bookmarks. You can also log in with
Flashcards ?
My bookmarks ?
+ Add current page to bookmarks
Mentioned in ?
References in periodicals archive ?
"The Piezoelectricity of Poly(Vinylidene Fluoride)." Japanese Journal of Applied Physics.
Forced transverse vibration analysis of a circular viscoelastic polymeric piezoelectric microplate with fluid interaction
Piezoelectricity is related to the generation of opposite electric charges on the surfaces of a crystal, when it is subjected to directional stress or under hydrostatic stresses [2].
Recent Advances in Ferroelectric Nanosensors: Toward Sensitive Detection of Gas, Mechanothermal Signals, and Radiation
Professor Tofail Syed from the University's Physics Department said: "Crystals are the gold-standard for measuring piezoelectricity in non-biological materials.
Scientists produce electricity from tears and milk
Starting from the governing equations of piezoelectricity and following the derivation presented by Rovenski et al.
The Generalized Twist for the Torsion of Piezoelectric Cylinders
For langasite family, there are many investigations about the relationship between piezoelectricity and chemical composition.
Langasite Family Midinfrared Nonlinear Optical Oxide Materials: Structure, Property, and Applications
In addition, when measuring CVP, we used a U-tube manometer instead of a piezoelectricity transducer.
A Non-invasive method for assessment of intravascular fluid status: Inferior vena cava diameters and collapsibility index
[20.] Dal Corso A, Posternak M, Resta R, Baldereschi A (1994) Ab initio study of piezoelectricity and spontaneous polarization in ZnO.
Zinc oxide crystals with controlled size and morphology
Yang, Saint Venant's principle in linear piezoelectricity, Journal of Elasticity 38, (1995), pp.
On a frictional contact problem with adhesion in piezoelectricity
To create the piezoelectric properties in the electrospun PVDF nanofiber web, the [beta]-phase crystalline should be formed which is the one with the most effective piezoelectricity. Hence, X-ray diffraction (XRD) of the samples with and without LiCl was performed to evaluate the formation of this phase.
Investigation of [beta] phase formation in piezoelectric response of electrospun polyvinylidene fluoride nanofibers: LiCl additive and increasing fibers tension
The variational equations for linear piezoelectricity are presented in this section.
A Meshless Radial Basis Function Based on Partition of Unity Method for Piezoelectric Structures