Carnivorous mammals of the suborder Pinnipedia, which includes 32 species of seals, sea lions, and walrus in 3 families. All species of the order are found along coastal areas, from the Antarctic to the Arctic regions. Although many species have restricted distribution, the group as a whole has worldwide distribution.

Pinnipeds are less modified both anatomically and behaviorally for marine life than are other marine mammals: Each year they return to land to breed, and they have retained their hindlimbs. They are primarily carnivorous mammals, with fish supplying the basic diet. They also eat crustaceans, mollusks, and, in some instances, sea birds. Their body is covered with a heavy coat of fur, the limbs are modified as flippers, the eyes are large, the external ear is small or lacking, and the tail is absent or very short.

The single species of the family Odobenidae is the walrus (Odobenus rosmarus); it grows to 10 ft (3 m) and weighs 3000 lb (1350 kg). It has no external ears but does have a distinct neck region. The upper canines of both sexes are prolonged as tusks which can be used defensively (illus. a). The walrus feeds on marine invertebrates and fish. 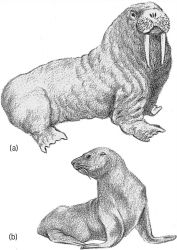 The family Otariidae, the eared seals, includes the sea lions and fur seals (illus. b), which are characterized by an external ear. The neck is longer and more clearly defined than that of true seals, and the digits lack nails. The California sea lion (Zalophus californianus) occurs along the Pacific coast, and is commonly seen in zoos and performing in circuses. The southern sea lion (Otaria byronia) is found around the Galapagos Islands and along the South American coast. Stellar's sea lion (Eumetopias jubatus) is a large species found along the Pacific coast. Minor species are the Australian sea lion (Neophoca cinerea) and the New Zealand species (Phocarctos hookeri).

Phocidae is the largest family of pinnipeds, the true seals. It includes the monk seals, elephant seals, common seals, and other less well-known forms. The family is unique in that the digits have nails, the soles and palms are covered with hair, and the necks are very short. Most species live in marine habitats; however, the Caspian seal (Pusa caspica) lives in brackish water. The only fresh-water seal is the Baikal seal (P. sibirica). It is estimated that there are between 40,000 and 100,000 Baikal seals in Lake Baikal. One of the best-known species is the Atlantic gray seal (Halichoreus grypus), a species fround in the North Atlantic along the coasts of Europe, Iceland, and Greenland. See Carnivora, Mammalia

Feedback
Flashcards & Bookmarks ?
Please log in or register to use Flashcards and Bookmarks. You can also log in with
Flashcards ?
My bookmarks ?
+ Add current page to bookmarks
Mentioned in ?
References in periodicals archive ?
"We now see the forced protection of pinnipeds for many decades has allowed their populations to explode to alarming numbers creating an environmental disaster the likes never seen before.
Pressure mounts for a seal harvest in B.C.: Growing markets in Asia will support sealing industry that can protect wild fish stocks and create 4,000 jobs say First Nations groups
This research/manuscript makes reference to and was conducted in correlation with the thesis entitled Pinnipeds and PTSD: An Analysis of a Human-Animal Interaction Program for Veterans.
Pinnipeds and PTSD: An Analysis of a Human-Animal Interaction Case Study Program for a Veteran
The rate of consumption of salmonids by pinnipeds and other marine mammal predators is of long-term management interest (Adams and others 2016).
Dietary composition of four stocks of pacific harbor seal (phoca vitulina richardii) in the northern california current large marine ecosystem as synthesized from historical data, 1931-2013
In this context, several fossil remains of vertebrates have been recorded, corresponding to marine mammals, mainly cetaceans and pinniped. The remains are incomplete due to different factors, mainly the action of large scavengers.
Palaeoenvironmental interpretation of a sand-dominated coastal system of the Upper Miocene of eastern Guadalquivir Basin (south Spain): fossil assemblages, ichnology and taphonomy
Upon opening the gastrointestinal tract of a harp seal, Smith was excited to discover a new entozoan parasite (Lamont, 1876:218), which was likely a nematode, cestode, or acanthocephalan, the prevalent helminth parasites in pinniped gastrointestinal tracts (Dailey, 2005).
The influence of Whaler William Scoresby, Jr. on the Arctic Observations of Sir James Lamont
Pinniped taxonomy: review of the evidence for description of currently recognized pinniped species and subspecies.
Ectoparasitos del lobo marino sudamericano (Otaria flavescens) de la costa peruana
Larger and older Greenland sharks have been shown to prey on live pinnipeds (Fisk et al., 2002; Leclerc et al., 2012), although such events may be ambush attacks on seals sleeping at the ocean surface (Watanabe et al., 2012).
In cold blood: evidence of Pacific sleeper shark (Somniosus pacificus) predation on Steller sea lions (Eumetopias jubatus) in the Gulf of Alaska
As is often the case elsewhere, these findings indicate that pinnipeds from the South Hemisphere are conducting long movements not only to the south, but farther north and observed in geographical location far away of their home ranges, above of the equatorial line, as further corroborated here for A.
Sobre la presencia de un lobo peletero de Juan Fernandez (Arctocephalus philippii) en la costa del Pacifico de Colombia: un nuevo registro extra-limital
The location of biologically productive sites and associated physical fronts may result in high abundance of prey that compound the diet of pinnipeds (Bowen et al., 2002).
Occupancy dynamics of South American Sea-Lions in Brazilian haul-outs/Dinamica de ocupacao do Leao-Marinho-do-Sul no Brasil
By land or sea: Most Pinnipeds can hear, see and communicate both on land and underwater.
Ready to roar: sea lions coming to Mote in December
"It's not quite as much as pinnipeds [such as seals], but it's more than a rat's whisker."
Dolphin can sense electric fields: ability may help species track prey in murky waters
In 1994, the Marine Mammal Protection Act (MMPA) was amended to include a provision that would allow the lethal take of pinnipeds that were causing 'significant negative impact' to salmonid species listed by the Endangered Species Act.
One sea lion's worth - evaluating the role of values in section 120