(redirected from Planchette board)
Also found in: Dictionary, Thesaurus.

a heart-shaped board on wheels, on which messages are written under supposed spirit guidance
Collins Discovery Encyclopedia, 1st edition © HarperCollins Publishers 2005 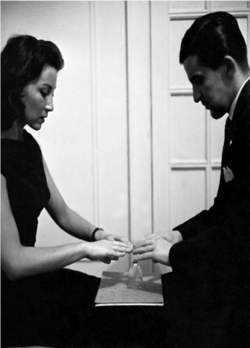 A man and woman attempt to communicate with spirits, using an upturned wine glass planchette and a talking board, c. 1950. Orlando/Three Lions/Qetty Images.

The word planchette means “plank; small board, or platform.” It is, in fact, a small platform used in Spiritualism as a tool to communicate with spirits. It is usually about three inches wide and four inches long, resting on three small legs. There are many different designs but an early, popular, design was heart shaped; the point of the heart working as a pointer. On a Ouija® Board, or similar talking board, the planchette slides about the surface of the board, pointing at letters to spell out messages. One, two, or more people lightly rest their finger tips on the top edges of the device, to channel into it the power to make it move.

The three legs are either tipped with felt so that they will slide easily on a polished surface, or have small castor wheels on them. Sometimes, if automatic writing is to be done, one of the legs is replaced by a pencil, the point of which traces letters onto a sheet of paper over which the planchette moves. This is known as a “pencil planchette.”

The moving platform was invented in 1853 by a well known French Spiritualist named M. Planchette. Fifteen years after its original appearance, it became widely used, thanks to an American toy manufacturer who started producing them in quantity. It is said that a similar form of communicating board was in use in Greece at the time of Pythagoras, about 540 BCE. According to a French writer this was a “mystic table on wheels,” that moved about indicating signs engraved on a stone slab.

There have been a wide variety of designs for planchettes, some of them connecting the platform to a clock-like dial with the letters of the alphabet on it, some allowing the platform to slide sideways in a track, to do its pointing. The board produced commercially by William Fuld, and then later by Parker Brothers, has a planchette on three legs whose shape comes to a point under the single leg. In the center area of the device there is a plastic window with a pin in its center, pointing down. The instructions that come with the set say “The mysterious message indicator will commence to move … as it passes over Ouija® talking board each letter of a message is received as it appears through the transparent window covered by the message indicator.” This is not strictly true. Sometimes a string of letters is received that make no sense whatsoever … until it is realized that the planchette is no longer showing the relevant letters through its plastic “window” on the one line, but is pointing to the letters on the line above with its tapered point.

A very simple, yet very effective, talking board can be made by writing the letters of the alphabet on pieces of paper and laying them down in a circle, around the edge of a table. A wine glass can then be upturned and used as a planchette, the participants resting their fingers on the now-top edge of the glass. The glass will slide over the table surface to stop in front of appropriate letters.