a layer of a homogeneous medium that is bounded by parallel surfaces and is transparent for some range of wavelengths λ of optical radiation. The optical path of a light ray in a plane-parallel plate is nd, where d is the geometrical thickness of the plate, and n = n(λ) is the refractive index of the material of the plate. Suppose the angle of incidence i of a light ray on a plane-parallel plate is nonzero (Figure 1). When the ray passes through the plate, it preserves its direction as a result of being refracted twice at the surfaces of the plate but is displaced by the distance §L. The larger are i, d, and n, the greater is §L. When a plane-parallel plate is inserted into the path of a beam of rays forming an optical image of a point, the image is displaced by the distance δl. For a paraxial beam of rays whose axis is normal to the plate, δl = d(l — 1/n). 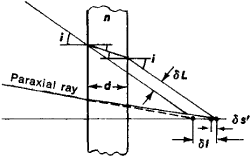 Since optical objects that are not infinitely distant always emit beams of rays with i ≠ 0, a plane-parallel plate used as an optical element has aberrations, in particular, spherical aberration, chromatic aberration, and astigmatism. For sufficiently distant objects and sufficiently small d these aberrations are insignificant. When plane-parallel plates and reflecting prisms that are optically equivalent to such plates are incorporated in optical systems, these aberrations must be taken into account and corrected.

Plane-parallel plates are used as protective glass for windows and light filters (plane-parallel plates of colored materials). They are also used in goniometric devices (when the angular displacements of the image are small), in some interferometers, and as optical compensators.

Feedback
Flashcards & Bookmarks ?
Please log in or register to use Flashcards and Bookmarks. You can also log in with
Flashcards ?
My bookmarks ?
+ Add current page to bookmarks
Mentioned in ?
References in periodicals archive ?
Other topics include the law of refraction as the foundation of geometrical optics, the transition from a thin to a thick lens, systems with two separated components, the single-image mirror, the plane-parallel plate, and details of a hybrid lens.
Optical design; applying the fundamentals
Some optical properties of the two plane-parallel plates cut from the crystal are described in Syuy et al.
Conformity check of thickness to the crystal plate [lambda]/4([lambda]/2)