While traditional astrologers, both eastern and western, use a geocentric chart, research has been undertaken to consider charts centered on other objects within our solar system, notably the Sun and planets. The premise for such a relocation of the center is that the logos of each planet at a specific point in time can be described by looking at such a chart.

From the perspective of Mercury and Venus, the Sun is a vast presence. These two planets have no moons of their own. Both planets can be found in any relationship to the Sun and each other in the chart, unlike the geocentric model in which Mercury and Venus must always be near the Sun.

The planets outside the orbit of the Earth all have moons. For charts centered on these planets, the moons become the dominant factors in the chart. Many of them orbit at high speeds, and their changing positions provide very accurate timers. For example Phobos, one of the moons of Mars, orbits in under eight hours. As the distance from the Sun increases, the significance of the moons increases, as they command the full 360° range of possibility, while the inner planets cluster closer and closer to the Sun.

Stephanie Jean Clement, in her book Planets and Planet-Centered Astrology, introduced the subject of planet-centered astrology by examining some of the astronomy of each planet and the more significant moons. This work is based on the premise that the planet-centered perspective is relevant to individuals, even though being on each of the planets is not possible. The planet-centered chart affords the opportunity to consider life from the point of view of the planet, not the individual human being. This transpersonal perspective considers archetypal energies, the mythology surrounding the planet and its moons, and traditional astrological understanding of the planets, against the backdrop of the zodiac. 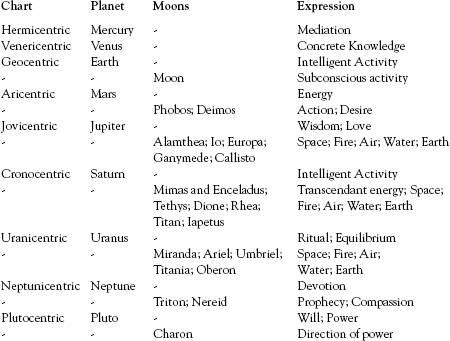 By examining planet-centered charts, an individual can obtain a much clearer view of personal processes and attitudes. Clarity is obtained by considering each chart as coming from the perspective of that planet, and not from one’s personal perspective. The Cronocentric (Saturn-centered) chart provides a transpersonal view of Saturn’s role in one’s life. The major moons of Saturn then offer five specific alchemical possibilities for consideration, providing a freer position of creative choice.