Plant viruses are pathogens which are composed mainly of a nucleic acid (genome) normally surrounded by a protein shell (coat); they replicate only in compatible cells, usually with the induction of symptoms in the affected plant. Viroids are among the smallest infections agents known. Their circular, single-stranded riboncleic acid (RNA) molecule is less than one-tenth the size of the smallest viruses.

Viruses can be seen only with an electron microscope (see illustration). Isometric (spherical) viruses range from 25 to 50 nanometers in diameter, whereas most anisometric (tubular) viruses are 12 to 25 nm in diameter and of various lengths (200–2000 nm), depending on the virus. The coat of a few viruses is covered by a membrane which is derived from its host. 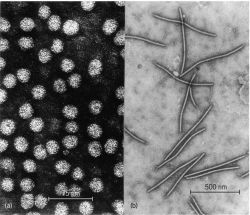 Over 800 plant viruses have been recognized and characterized. The genomes of most of them, such as the tobacco mosaic virus (TMV), are infective single-stranded RNAs; some RNA viruses have double-stranded RNA genomes. Cauliflower mosaic virus and bean golden mosaic virus are examples of viruses having double-stranded and single-stranded deoxyribonucleic acid (DNA), respectively. The genome of many plant viruses is a single polynucleotide and is contained in a single particle, whereas the genomes of brome mosaic and some other viruses are segmented and distributed between several particles. There are also several low-molecular-weight RNAs (satellite RNAs) which depend on helper viruses for their replication. See Deoxyribonucleic acid (DNA), Ribonucleic acid (RNA)

The natural hosts of plant viruses are widely distributed throughout the higher-plant kingdom. Some viruses (TMV and cucumber mosaic virus) are capable of infecting over a hundred species in many families, whereas others, such as wheat streak mosaic virus, are restricted to a few species in the grass family. The replication of single-stranded RNA viruses involves release of the virus genome from the coat protein; the association of the RNA with the ribosomes of the cell; translation of the genetic information of the RNA into specific proteins, including subunits of the coat protein and possibly viral RNA-synthesizing enzymes (replicases); transmission by vectors and diseases induction; synthesis of noninfective RNA using parental RNA as the template; and assembly of the protein subunits and viral RNA to form complete virus particles.

With double-stranded DNA viruses, viral DNA is uncoated in a newly infected cell and transported to the nucleus, where it associates with histones to form a closed circular minichromosome. Two major RNA species (35S and 19S) are transcribed from the minichromosome by a host-encoded enzyme and are translated in the cytoplasm to produce virus-associated proteins. The 35S RNA serves as the template for a viral enzyme which transcribes it to viral DNA, which is then encapsidated to form virus particles.

Symptoms are the result of an alteration in cellular metabolism and are most obvious in newly developing tissues. In some plants, depending on the virus, the initial infection does not spread because cells surrounding the infected cells die, resulting in the formation of necrotic lesions. Such plants are termed hypersensitive. The size and shape of leaves and fruit may be adversely affected, and in some instances plants may be killed. Not all virus infections produce distinctive symptoms.

The most common mode of transmission for many viruses is by means of vectors, mainly insects (predominantly aphids and leafhoppers), and to a lesser extent mites, soil-inhabiting fungi, and nematodes which acquire viruses by feeding on infected plants. Viruses transmitted by one class of vector are rarely transmitted by another, and there is often considerable specificity between strains of a virus and their vectors.

Only about 30 viroids are known, but they cause very serious diseases in such diverse plants as chrysanthemum, citrus, coconut, and potato. They can also be isolated from plants that do not exhibit symptoms. Viroids are mainly transmitted by vegetative propagation, but some, such as potato spindle tuber viroid, are transmitted by seed or by contact between infected and healthy plants. Tomato planta macho viroid is efficiently transmitted by aphids. See Plant pathology, Viroids, Virus

Feedback
Flashcards & Bookmarks ?
Please log in or register to use Flashcards and Bookmarks. You can also log in with
Flashcards ?
My bookmarks ?
+ Add current page to bookmarks
References in periodicals archive ?
A list of proposed standard acronyms for plant viruses and viroids. Arch Virol 1991:120:151-64.
Emerging issues in virus taxonomy
* Fast, accurate tests, based on antibody testing technology, were developed for trichinosis in pigs; for anaplasmosis, a costly parasitic disease in cattle; and for plant viruses and viroids.
Beltsville Agricultural Research Center
Encyclopedia browser ?
Full browser ?
CITE
Site: Follow: Share:
Open / Close