The principal house of a southern plantation on which cash crops were cultivated; typically two stories with very tall windows, with a veranda across the entire front facade, supported by two-story columns.
Illustrated Dictionary of Architecture Copyright © 2012, 2002, 1998 by The McGraw-Hill Companies, Inc. All rights reserved 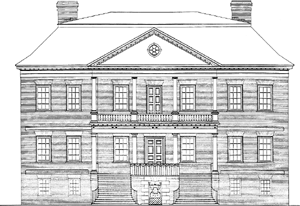 Feedback
Flashcards & Bookmarks ?
Please log in or register to use Flashcards and Bookmarks. You can also log in with
Flashcards ?
My bookmarks ?
+ Add current page to bookmarks
Mentioned in ?
References in periodicals archive ?
Originally the manor house for a 10,000-acre sugar plantation, Madewood is one of the finest Greek Revival plantation houses in the South and was awarded National Historic Landmark status in 1983.
Southern plantation in Louisiana on the market for $2.6 million -BYLN- TopTenRealEstateDeals.com
Others who attended the unveiling included representatives from Fortnum & Mason, the United Kingdom Tea & Infusions Association, Tetley Tea, the Twining Tea family, the Brooke family of Brooke Bond, the Bunting family (who financed Plantation House), the MacDonald Gill family (who made tea maps in the 1930s), Thompson Lloyd & Ewart Ltd., Taylors of Harrogate, International Tea Committee, UK Tea Academy, Forum of the Future of Tea, Tregothnan Tea of UK, Serica, the Trade Commissioner of Sri Lanka, Williamsons Tea, Tea & Scones, The British Museum, The London School of Economics and Barings Bank Archives.
LTHA unveils plaque honouring the Tea History of London
The narrative dynamically develops this relationship between observer and medium, encoding the plantation house as an invisible architecture that becomes visible and tactile through a series of mediated surfaces.
Encoding Yoknapatawpha: Considering Faulkner in the Information Age
The Bowe's daughter Dorothy Mai "Dot" Bowe Windgerd shares that the family lived in the original plantation house for several years before building the home in 1937.
A Delta legacy: living in a house with such a great story to tell, the Poole family is poised to continue great traditions
(AP) -- Through the gates and down a winding dirt road by the 1824 Foscue Plantation House near here, student archaeologists are digging squares and sifting sand to discover more about our colonial past.
Student archaeologists dig at NC plantation
"The Lakeport Plantation house is Arkansas' grandest remaining example of antebellum Greek Revival architecture," says the blog, written by Lee Price, director of development at the Conservation Center for Art & Historic Artifacts in Philadelphia.
See Arkansas First or, at least, next
With its elegant bay windows and breezy verandah, the gleaming white Kingsley Plantation House is Florida's oldest and best-preserved planter's residence, but a recent discovery "out back," in the woods surrounding the 25 remaining slave cabins has upstaged the splendid manor house.
Secrets of the tombs: archaeologists at the Kingsley Plantation in Florida shed light on the slaves who lived, worked and died there 200 years ago
The closest thing to a reception desk on the entire island would be the long bar in the beautifully recreated Plantation House.
Castaway in Fiji; Nick Walton finds solace in the Pacific's hidden paradise
"He lives in the grounds of Plantation House which is the governor's residence with five other tortoises who are much younger than him.
Meet the world's oldest living animal Jonathan - a 178-yr-old tortoise!
From an 18th century remodeled palace, or a Rajput Haveli of Rajasthan to a plantation house or a traditional Tharavadu houses in Kerala across a hill, one is free to choose his/her style of vacation.
Bring the Monsoon Magic into your life with Mahindra Homestays!
The architecture and interior design will take inspiration from a typical Barbadian plantation house. Original commissioned artwork is displayed throughout the suites and all feature complimentary Wi-Fi, 42-inch flat-screen TVs with satellite channels and a media panel with a DVD/CD player and MP3 docks.
Travel Business Technology News - Latin America / Caribbean