The quanta of waves produced by collective effects of large numbers of electrons in matter when the electrons are disturbed from equilibrium. Metals provide the best evidence of plasmons, because they have a high density of electrons free to move. The results of plasmon stimulation are seen in the illustration. The graph shows the probability of energy losses by fast electrons transmitted through a thin aluminum foil. The number of detected electrons in a beam is plotted against their energy loss during transit through the foil. Each energy-loss peak corresponds to excitation of one or more plasmons. Within experimental error, the peaks occur at integral multiples of a fundamental loss. Further evidence is the fact that the areas under the peaks (a measure of the energy-loss probability) follow a Poisson distribution. 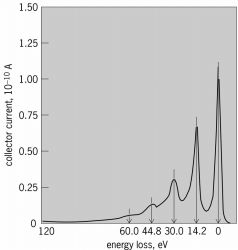 The name plasmon derives from the physical plasma as a state of matter in which the atoms are ionized. At the lowest densities this means an ionized gas, or classical plasma; but densities are much higher in a metal, or quantum plasma, the atoms of a solid metal being in the form of ions. In both types of physical plasma, the frequency of plasma-wave oscillation is determined by the electronic density. In a quantum plasma the energy of the plasmon is its frequency multiplied by Planck's constant, a basic relationship of quantum mechanics. See Free-electron theory of metals, Quantum mechanics

The plasmon energy for most metals corresponds to that of an ultraviolet photon. However, for silver, gold, the alkali metals, and a few other materials, the plasmon energy is sufficiently low to correspond to that of a visible or near-ultraviolet photon. This means there is a possibility of exciting plasmons by light. If plasmons are confined upon a surface, optical effects can be easily observed. In this case, the quanta are called surface plasmons, and they have the bulk plasmon energy as an upper energy limit.

the totality of extranuclear (nonchromosomal) factors of heredity concentrated in the cytoplasm of a cell. Plasmon consists of discrete units known as plasmagenes. The extra-chromosomal gene in plants was first described in 1908 by the German botanist K. Correns. Cytoplasmic inheritance of characters is characterized by absence of regular Mendelian segregation in successive generations and by transmission predominantly through the maternal line. Plasmagenes are localized in self-reproducing organoids of the cell: mitochondria, plastids (including chloroplasts), and, possibly, kinetosomes and centrioles. They may exist in ordinary and mutant form, influencing various characters of the cell. In cases investigated, desoxyribonucleic acids serve as the material carriers of cytoplasmic inheritance.

the quantum of plasma or solid-state plasma density oscillations accompanied by longitudinal electric field oscillations. The plasmon is a quasiparticle. Its energy ℇ is approximately equal to ℏωL, where

is the angular plasma (Langmuir) frequency, ℏ is Planck’s constant, η is the number of charged particles per unit volume, and e and m are the charge and mass of the particles. The energy of a plasmon is determined from the characteristic energy losses sustained by electrons in metals: electrons passing through the plate expend energy on the excitation of plasma oscillations, that is, on the “creation” of plasmons. Another method of determining the energy of a plasmon is analysis of the light spectrum emitted by plasmons.

A quantum of plasma. A plasmon is the gas particle equivalent of a photon, which is a light particle. Surface plasmons, which reside on the surface of materials, are expected to yield terahertz transmission speeds within electronic circuits some day. See photon.
Copyright © 1981-2019 by The Computer Language Company Inc. All Rights reserved. THIS DEFINITION IS FOR PERSONAL USE ONLY. All other reproduction is strictly prohibited without permission from the publisher.