[plə′tin·ə‚trän]
(electronics)
A microwave tube that may be used as a high-power saturated amplifier or oscillator in pulsed radar applications; requires permanent magnet just as does a magnetron.
McGraw-Hill Dictionary of Scientific & Technical Terms, 6E, Copyright © 2003 by The McGraw-Hill Companies, Inc.
The following article is from The Great Soviet Encyclopedia (1979). It might be outdated or ideologically biased.

a backward-wave magnetron-type device for the broadband amplification and generation of microwave electromagnetic oscillations. It was invented in 1949 by the American engineer W. Brown. It is used most often as an amplifier and is called an amplitron; when used with additional devices to produce positive feedback it functions as an oscillator and is called a stabilotron. 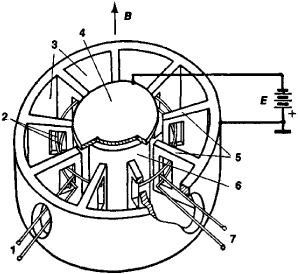 The platinotron differs from a magnetron in that its resonator circuit is open (Figure 1). Its electron stream, however, is closed and the platinotron amplifies oscillations only at frequencies that satisfy the condition of synchronism between the electron stream and the electromagnetic field of the wave traveling along the system of resonators. The amplitude-frequency characteristic of a platinotron is almost uniform in the operating-frequency band; the phase-frequency characteristic is nearly linear, but the amplitude response (Figure 2) is nonlinear.

Platinotrons are used in transmitting equipment for radar, communication, navigation, and telemetry systems to amplify frequency-and phase-modulated signals at frequencies from 0.5 to 10 gigahertz. Industry manufactures platinotrons with output powers from several kilowatts to several tens of megawatts in the 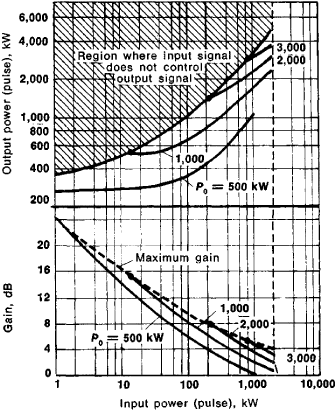 Figure 2. Dependence of output power and gain of a platinotron on input power for various values of the power supply po

pulsed mode of operation and from several watts to 100 kilowatts in the continuous mode. The operating-frequency band is about 10 percent of the median frequency with a gain of 7 to 17 decibels. Platinotrons have a high efficiency, which can reach 70 to 80 percent.