(plăt'ēhĕlmĭn`thēz), phylum containing about 20,000 species of soft-bodied, bilaterally symmetrical, invertebrate animals, commonly called flatworms. There are four classes: the free-living, primarily aquatic class, Turbellaria, and Trematoda, Cestoda, and Monogenea, which are considerably modified for their exclusively parasitic existence. While the structure of the flatworms marks a major step in animal evolution, their origin and relationships within the group are still controversial.

Flatworms are dorso-ventrally flattened. The epidermis is generally ciliated in the turbellarians, while trematodes and cestodes are covered with a cuticle. Beneath the outer covering are two layers of muscle, an outer circular layer, and an inner longitudinal layer; this arrangement permits an undulating form of locomotion that can be observed in the larger turbellarian species. A saclike digestive cavity, with a single opening to the outside that serves as both mouth and anus, is sometimes present; in the simpler forms it is absent or unbranched, but in higher forms it branches to all parts of the body. The major sense organs, when present, are concentrated in the head, or front end. Although a primitive nerve net is present in some of the simpler forms, others have several nerve cords extending from a brain along the length of the body. The latter pattern of organization is retained in the nervous systems of higher invertebrates, specifically annelids and arthropods.

The reproductive system of flatworms is characteristically hermaphroditic (i.e., each individual produces both eggs and sperm), and cross-fertilization between individuals is typical. While trematodes and cestodes shed eggs almost continuously, turbellarians exhibit seasonal reproductive activity and, in addition, display asexual reproduction and the ability to regenerate severed parts of the body.

All except the simplest flatworms have nephridial tubules, called protonephridia, usually distributed throughout the body. Such structures consist of an external opening and a tubule that branches internally, terminating in a number of blind, bulb-shaped structures called flame bulbs, which bear tufts of cilia. They probably function as excretory and osmoregulatory organs.

The mostly free-living, primarily carnivorous, flatworms of class Turbellaria are characterized by a soft epidermis that is ciliated, at least on the ventral surface. The movement of the cilia propels the smaller forms. Larger species glide along by muscular waves, usually over mucous beds secreted by special cells.

Turbellarians are generally divided into five groups based primarily on differences in the form of the digestive cavity, a structure that is readily observable through the transparent body wall. The most primitive turbellarians, the acoels, have no digestive cavity. The ventral mouth, and sometimes a simple pharynx, lead to an inner mass of nutritive cells. Most species measure less than 1-8 in. (3 mm) in length.

The rhabdocoels have straight, unbranched digestive cavities. Some authorities believe that the rhabdocoels gave rise to both the trematodes and cestodes because several rhabdocoel species exhibit commensal relationships, which presumably could have given rise to parasitism. The allocoels were formerly classified together with the rhabdocoels; the gut can be either saclike or branched.

The triclads, also known as planariansplanarian,
common name for several genera of the free-living (turbellarian) flatworms belonging to the order Tricladida, a name that derives from their characteristic three-branched digestive cavities. Most species range from 1-8 in. to about 1 in. in length (.32–2.
..... Click the link for more information. , are relatively large flatworms named for their three-branched gut. Most species range from 1-8 in. (3 mm) to about 1 in. (2.5 cm) in length. Planarians have more sense organs and a more complex brain than the other turbellarians. The freshwater species Dugesia tigrina has primitive eyes and tactile lobes, or auricles, on the sides of the head. The muscular pharynx can be extruded for food capture. Dugesia and many other planarians can regenerate entirely new individuals from small pieces cut from the body.

The group of turbellarians known as polyclads tend to be larger (1–2 in./2.5–5 cm) and more oval-shaped than the triclads. Their bodies are extremely flat and leaflike, and the gut is subdivided into numerous branches. Many are brightly colored and some have ruffled edges. Some species have numerous eyes scattered over the front end of the body.

The parasitic flatworms of class Trematoda, also called flukesfluke,
parasitic flatworm of the trematoda class, related to the tapeworm. Instead of the cilia, external sense organs, and epidermis of the free-living flatworms, adult flukes have sucking disks with which they cling to their hosts and an external cuticle that resists digestion
..... Click the link for more information. , have oral suckers, sometimes supplemented by hooks, with which they attach to their vertebrate hosts. Trematodes have retained the same body form and digestive cavity as the turbellarians. However, practically the entire interior is occupied by the reproductive system; the organism is capable of producing huge numbers of offspring. Trematodes of the order Digenea have complex life cycles involving two or more hosts. The larval worms occupy small animals, typically snails and fish, and the adult worms are internal parasites of vertebrates. Many species, such as the liver fluke Clonorchis sinensis and the blood fluke (Schistosoma), cause serious diseases in humans.

The body of the cestodes, also known as tapewormstapeworm,
name for the parasitic flatworms forming the class Cestoda. All tapeworms spend the adult phase of their lives as parasites in the gut of a vertebrate animal (called the primary host).
..... Click the link for more information. , has lost the typical turbellarian form. Although there are a few unsegmented species, the bulk of a typical cestode body consists of a series of linearly arranged reproductive segments called proglottids. There is no mouth or digestive system; food is absorbed through the cuticle. Adults live in the digestive tract of vertebrates, and larval forms encyst in the flesh of various vertebrates and invertebrates.

The body of an adult tapeworm is virtually a reproductive factory. Behind a small securing knob, called a scolex, which bears a circle of hooks or other attachment organs, the proglottids constantly bud off and gradually enlarge. As they mature they become filled with male and female reproductive organs. Cross-fertilization takes place with adjacent worms or neighboring proglottids; in some cases self-fertilization occurs. In some species the ripe proglottids, filled with eggs, are shed. In others the fertilized eggs leave the adult host in the feces. If the eggs are consumed by the intermediate host, the life cycle continues. Tapeworm species that infest human intestines as adults include Taenia saginata, T. solium, the dwarf tapeworm, Hymenolepsis nana, and the fish tapeworm, Diphyllobothrium latum, which can reach lengths of up to 50 ft (15 m).

Monogenetic flukes spend their entire life cycle as parasites on a single host, often on the gills and skin of fish; they include no human parasites. They hold on to the fish by the use of hooks and attachment organs at the posterior end. Most of the parasite's body space is devoted to the hermaphroditic reproductive system. The egg on hatching releases a ciliated larva that enables the parasite to reach a new host. Species of the genus Gyrodactylus can can be serious pests in hatcheries, particularly since a single worm can give rise to more than one hundred descendants in three weeks.

A phylum of the invertebrates, commonly called the flatworms. They are bilaterally symmetrical, nonsegmented, dorsoventrally flattened worms characterized by lack of coelom, anus, circulatory and respiratory systems, and exo- or endoskeleton. They possess a protonephridial excretory system, a complicated hermaphroditic reproductive system, and a solid mesenchyme which fills the interior of the body (see illustration). Three classes occur in the phylum: (1) the Turbellaria, mainly free-living, predacious worms; (2) the Trematoda, or flukes, holozoic ecto- or endoparasites; and (3) the Cestoda, or tapeworms, saprozoic endoparasites in the enteron of vertebrates, whose larvae are found in the tissues of invertebrates or vertebrates.

Turbellaria are widespread in fresh water and the littoral zones of the sea, while one group of triclads occurs on land in moist habitats. Adult trematodes occur on, or in, practically all tissues and cavities of the vertebrates on which they feed. They are responsible for troublesome diseases in humans and animals. Larval flukes are frequent in mollusks, mainly gastropods, and occasionally occur in pelecypods. Vector hosts, such as insects and fish, are often interpolated between mollusk and vertebrate. Adult tapeworms, living in the enteron or the biliary ducts, compete with the host for food and accessory food factors such as vitamins. Larval tapeworms reside chiefly in arthropods, but larvae of one group, the Cyclophyllidea, develop in mammals, which may be severely impaired, or even killed, by the infection. 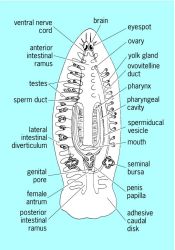 (flatworms), a large group of bilaterally symmetrical free-living or parasitic invertebrates. The Platyhelminthes are classified as a subphylum of the phylum Scolecida or as a separate phylum.

Flatworms range in length from 0.1 mm to several meters. The body is usually flattened and oval or somewhat elongate. It may be unsegmented or divided into several segments (tapeworms). Parasitic forms are equipped with such organs as suckers, proboscises, and hooks for attachment to a host. The body wall consists of a musculocutaneous sac, and the outer covering is a single layer of ciliated epithelium (in free-living forms) or a layer of basement membrane. The musculature is made up of annular, longitudinal, and transverse layers that enable the animal to move by means of a series of undulations. There is no body cavity, and the space between the musculocutaneous sac and the internal organs is filled with connective tissue, or parenchyma.

The mouth is situated ventrally or on the anterior end or, less commonly, the posterior end of the body. Most forms have a gut. In those flatworms lacking a gut (acoels), digestion takes place in the central part of the parenchyma. Tapeworms, which also lack a gut, feed by absorbing juices from the host’s intestine through their entire body surface. Flatworms do not have an anus.

The nervous system consists of a brain, lying at the anterior end of the body, and several paired longitudinal nerve cords, of which the lateral ones are usually the most developed. The sensory organs in the free-living forms include tactile papillae or tentacles, eyes, and organs of equilibrium (statocysts). There is no vascular system, and respiration is cutaneous. The excretory organs are protonephridia.

Flatworms are hermaphrodites with complex generative ducts. In most forms, the female portion consists of the ovary, which produces the ova, and the vitellarium, which supplies the ova with yolk and a shell. In free-living flatworms, development is direct or with metamorphosis. In the latter case, Miiller’s larvae are formed. A complex developmental cycle with the alternation of free-living and parasitic larvae and even of generations differing in structure is generally characteristic of parasitic flatworms. Free-living flatworms live in seas, in freshwaters, and on land. All others are external or internal parasites of animals and man.