(plo͞otō`nēəm), radioactive chemical element; symbol Pu; at. no. 94; mass no. of most stable isotope 244; m.p. 641&degC; b.p. 3,232&degC; sp. gr. 19.84 at 20&degC; valence +3, +4, +5, or +6. Plutonium is a silver-gray radioactive metal that has six allotropic forms (see allotropyallotropy
[Gr.,=other form]. A chemical element is said to exhibit allotropy when it occurs in two or more forms in the same physical state; the forms are called allotropes.
..... Click the link for more information. ). It is a member of the actinide seriesactinide series,
a series of radioactive metallic elements in Group 3 of the periodic table. Members of the series are often called actinides, although actinium (at. no. 89) is not always considered a member of the series.
..... Click the link for more information.  in Group 3 of the periodic tableperiodic table,
chart of the elements arranged according to the periodic law discovered by Dmitri I. Mendeleev and revised by Henry G. J. Moseley. In the periodic table the elements are arranged in columns and rows according to increasing atomic number (see the table entitled
..... Click the link for more information. .

Plutonium is chemically reactive. It tarnishes in air, taking on a yellow cast when oxidized. It dissolves in hydrochloric, hydriodic, and perchloric acids and reacts with the halogens, carbon, nitrogen, and silicon. Pure plutonium metal may be prepared by reduction of the trifluoride, PuF3, with calcium metal. Sixteen isotopes of plutonium are known. The most stable is plutonium-244 (half-life about 82 million years). By far the most important is plutonium-239 (half-life about 24,000 years), a nuclear fission fuel.

Plutonium-239 is produced in large quantities in nuclear reactors from uranium-238, an abundant but nonfissionable isotope. Uranium-238 absorbs neutrons emitted by the fission of uranium-235; uranium-239 is formed, which emits a beta particle and decays to neptunium-239; the neptunium-239 emits another beta particle, becoming plutonium-239. Once begun, the reaction proceeds spontaneously until the uranium fuel rods in the reactor are converted to a certain uranium-plutonium mixture. The rods are dissolved in acid and the plutonium separated by chemical means, especially by solvent extraction.

Plutonium is important for its use in nuclear weapons and nuclear reactors. Plutonium-238 has been used to power scientific equipment in lunar exploration and implanted heart pacemakers (see pacemaker, artificialpacemaker, artificial,
device used to stimulate a rhythmic heartbeat by means of electrical impulses. Implanted in the body when the heart's own electrical conduction system (natural pacemaker) does not function normally, the battery-powered device emits impulses that trigger
..... Click the link for more information. ). Plutonium is an extremely dangerous poison; it collects in the bones and interferes with the production of white blood cells.

Pu, an artificial radioactive chemical element with atomic number 94; an element of the actinide series.

Plutonium was discovered in 1940–41 by the American scientists G. Seaborg, E. McMillan, J. Kennedy, and A. Wahl, who obtained the isotope 238 Pu as a result of irradiation of uranium by nuclei of heavy hydrogen (deuterons). The new element was named for the planet Pluto, as the precursors of plutonium in the Mendeleev table, uranium and neptunium, were named for the planets Uranus and Neptune.

Isotopes of plutonium with mass numbers from 232 to 246 are known. Traces of the isotopes 247 Pu and 255 Pu were discovered in dust collected after explosions of thermonuclear bombs. The longest-lived isotope of plutonium is the α-radioactive 244 Pu, which has a half-life of about 7.5 × 107 yr. The half-lives of all the isotopes of plutonium are much less than the age of the earth, and therefore all the primary plutonium that existed on the planet at the time of its formation has completely decayed. However, extremely small amounts of 239 Pu are continuously formed during -β–decay of 239 Np, which in turn is formed in the nuclear reaction of uranium with neutrons, such as the neutrons of cosmic rays. Thus, traces of plutonium are found in uranium ores.

Plutonium is a shiny white metal that exists in six allotropic modifications at temperatures from room temperature to 640°C (its melting point). The allotropie transitions of plutonium are accompanied by discontinuous changes in its density (see Figure 1). A unique feature of metallic plutonium is that it contracts upon heating from 310° to 480°C, rather than expanding, as do other metals. 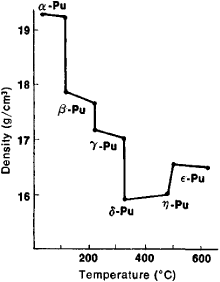 Figure 1. Change in density of metallic plutonium upon heating

The configuration of the three outer electron shells of the plutonium atom is 5s25p65d105f66s26p27s2. The chemical properties of plutonium are very similar to those of its precursors in the periodic system, uranium and neptunium. Plutonium forms compounds with oxidation states from + 2 to +7. The oxides PuO, Pu2O3, and PuO2 and a phase of mixed composition, Pu2O3—Pu4O7, are known. In its compounds with halogens, plutonium usually has an oxidation state of +3, although the halides PuF4, PuF6, and PuCl4 are also known. In solutions, plutonium exists in the forms Pu3+, Pu4+, PuO2 + (plutonoyl ion), PuO 22+ (plutonyl ion), and PuO53–, which correspond to oxidation states from + 3 to +7. These ions, with the exception of PuO53–, may be in solution simultaneously in equilibrium. Ions of plutonium of all oxidation states have a tendency toward hydrolysis and complexing.

Of all the isotopes of plutonium, the most important is the α-radioactive 239 Pu, with a half-life of 2.4 × 104 yr. The nuclei of 239 Pu are capable of fission by chain reaction under the action of neutrons, and therefore 239 Pu may be used as a source of atomic energy (the energy released by the disintegration of 1 g of 239 Pu is equivalent to the heat released upon combustion of 4,000 kg of coal).

In the USSR, the first attempts to produce 239 Pu began in 1943–44 under the direction of Academicians I. V. Kurchatov and V. G. Khlopin. Plutonium was first isolated in the USSR in 1945 from a sample of uranium under neutron bombardment. In a very short time, extensive studies of the properties of plutonium were carried out, and in 1949 the first plant for the radiochemical separation of plutonium began operation in the USSR.

The industrial production of 239 Pu is based on the reaction of nuclei of 238U with neutrons in nuclear reactors. The subsequent separation of plutonium from uranium, neptunium, and highly radioactive fission products is carried out by radiochemical methods, such as coprecipitation, extraction, and ion exchange. Metallic plutonium is usually produced by reduction of PuF3, PuF4, or PuO2 by vapors of barium, calcium, or lithium. The isotope 239Pu is used as a fissionable material in atomic reactors and in atomic and thermonuclear bombs. The isotope 238Pu is used for the production of atomic batteries with a service life of 5 yr or more. Such batteries may be used, for example, in current generators for cardiac pacemakers.

Bagley, K. Plutonii i ego splavy. Moscow, 1958. (Translated from English.)
Vdovenko, V. M., and B. V. Kurchatov. “Pervyi sovetskii plutonii.” Radiokhimiia, 1968, vol. 10, fasc. 6, p. 696.
Plutonii: Spravochnik, vols. 1–2. Edited by O. Wick. Moscow, 1971–73. (Translated from English.)
See also references under ACTINIDES.
S. S. BERDONOSOV
Plutonium in the organism. Plutonium is concentrated by marine organisms. Its coefficient of accumulation, which is the ratio of the concentration in the organisms to that in the environment, is 1,000–9,000 for algae, about 2,300 for plankton (mixed), up to 380 for mollusks, about 1,000 for starfish, and 5, 570, 200, and 1,060 for the muscles, bones, liver, and stomach tissue of fishes, respectively. Terrestrial plants take up plutonium mainly through their root system and accumulate it up to 0.01 percent of their weight.
In the human body, plutonium is retained primarily in the skeleton and liver, from which it is virtually not eliminated (particularly in the case of the skeleton). The most toxic isotope is 239Pu, which disrupts hematopoiesis and causes osteosarcomas and lung cancer. In the 1970’s, the fraction of plutonium in the radioactive pollution of the biosphere has been increasing: the intensity of irradiation of marine invertebrates by plutonium has become greater than that by 90Sr and 137Cs.

[plü′tō·nē·əm]
(chemistry)
A reactive metallic element, symbol Pu, atomic number 94, in the transuranium series of elements; the first isotope to be identified was plutonium-239; used as a nuclear fuel, to produce radioactive isotopes for research, and as the fissile agent in nuclear weapons.
McGraw-Hill Dictionary of Scientific & Technical Terms, 6E, Copyright © 2003 by The McGraw-Hill Companies, Inc.