[′plü·vē·ə‚graf]
(engineering)
recording rain gage
McGraw-Hill Dictionary of Scientific & Technical Terms, 6E, Copyright © 2003 by The McGraw-Hill Companies, Inc.
The following article is from The Great Soviet Encyclopedia (1979). It might be outdated or ideologically biased.

an instrument for recording the quantity, duration, and intensity of precipitation. 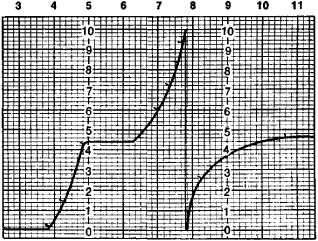 The pluviographs used in the USSR consist of a cylindrical receiving vessel with an area of 500 sq cm. When fluid precipitation flows from the vessel through a drain pipe into the water-collecting chamber, it causes movement of a float that is connected to a pointer. When the chamber is filled with water, the float rises and engages a mechanism that provides for forced discharge of the water through a siphon into a pail. The precipitation that has occurred is recorded on a special chart attached to a drum, which is rotated by a clock mechanism. The vertical lines (see Figure 1) correspond to the time, and the horizontal lines to the amount of precipitation. The record begins at the lower boundary of the chart (at zero); when the chamber is full (10 mm of precipitation), the pen reaches its upper limit, the discharge takes place, and the record begins again at zero.

Feedback
Flashcards & Bookmarks ?
Please log in or register to use Flashcards and Bookmarks. You can also log in with
Flashcards ?
My bookmarks ?
+ Add current page to bookmarks
Mentioned in ?
References in periodicals archive ?
Identifying individual rain events from pluviograph records: A review with analysis of data from an Australian dryland site.
Partitioning of rainfall into throughfall, stemflow, and interception loss in the Brazilian Northeastern Atlantic Forest/Particionamento da chuva pelo processo de interceptacao vegetal no semiarido nordestino
In areas where long term pluviograph data are not available, the R-factor may be estimated using mean annual rainfall or the Modified Fournier Index (e.g., Arnoldus 1977; Roose 1977; Stocking and Elwell 1976; Renard and Freimund 1994; Yu and Rosewell 1996b).
Estimating the r-factor with limited rainfall data: a case study from peninsular Malaysia
During the experiment, meteorological variables were measured by an automatic stations with the following sensors: PAR radiation (LI-COR) at 2 m height from the soil, wind speed and direction (anemometer, 03002-L RM Young) at 10 m height, psychrometer with thermometer shelter (Vaisala, CS 215) at 2 m height, pluviograph (TE 525) at 1.5 m height and heliograph.
Evapotranspiration and water response function of squash cv. 'Italiana' under different cultivation conditions/Evapotranspiracao e funcao de resposta hidrica da abobrinha cv. Italiana em diferentes condicoes de cultivo
In the previous studies, the regional relationship for parameter values developed for Australia was based on pluviograph data from several disparate studies, including 29 sites from NSW, 41 from the tropics, and four from South Australia (Yu 1998).
Modelling and mapping rainfall erosivity in New South Wales, Australia
The R-factor and its monthly distributions were calculated using a daily rainfall erosivity model (Yu and Rosewell 1996) that predicts R on the basis of an empirical relationship between R-factor calculated using pluviograph rainfall data and daily rainfall amount.
Predicting sheetwash and rill erosion over the Australian continent
The hyetograph data (pluviograph data) were digitized.
Erosive rainfall in Rio do Peixe Valley in Santa Catarina, Brazil: Part I--Determination of the erosivity index/Chuvas erosivas do Vale do Rio do Peixe: Parte I--Determinacao do indice de erosividade
2012) developed from observed 60-min pluviograph data in NSW.
Deriving RUSLE cover factor from time-series fractional vegetation cover for hillslope erosion modelling in New South Wales
Contour values ranging from 340 to 1470 MJ.mm/ ha.h.year were derived from pluviograph records from 29 stations in Victoria, spanning 346 complete station years.
An improved Victorian erosivity map
Rainfall data were monitored by an automated weather station installed in the study area, containing a bascule-type pluviograph, with data acquisition every 5 min.
Characteristics of rainfall and erosion under natural conditions of land use in semiarid regions/ Caracteristicas das chuvas e da erosao sob condicoes naturais de usos do solo no semiarido
In areas where long-term pluviograph data are not available, the R-factor may be estimated using mean annual rainfall or the Modified Fournier Index (e.g.
Spatial and seasonal distribution of rainfall erosivity in Australia
For this study, we have assembled weather data for Gunnedah from the following sources: (1) on-site daily rainfall, and maximum and minimum temperature recorded manually; (2) digitised pluviograph data at 6-min intervals; (3) complete DataDrill data set since 1957 for the site (QCCA 1998); and (4) global radiation data estimated using geo-stationary meteorological satellites (GMS) (Gautier et al.
Evaluation of WEPP for runoff and soil loss prediction at Gunnedah, NSW, Australia