Pneumatic gauges appeared in the 1920’s, when the French firm Sakma produced instruments of the Solex type.

A pneumatic gauge includes an air-preparation unit, in which the air is cleaned and its pressure stabilized; a reading or control device, which converts a change in the flow rate or the related pressure in the air duct into the value of the dimension being checked; and the measuring gear, with one or more nozzles (orifice diameter, 1–2 mm), from which the air flows out onto the part. A distinction is made between direct-reading and manometer gauges according to the type of reading device. In the direct-reading type (Figure 1) compressed air at a constant pressure enters the lower part of a transparent (usually glass) conical tube that is tapered from top to bottom and contains a bobber. Air is supplied from the upper part of the tube to the measuring nozzle and escapes through the gap S to the atmosphere. The velocity of the air causes the bobber to rise to a certain distance l from the zero mark on the scale, which is calibrated in units of length. 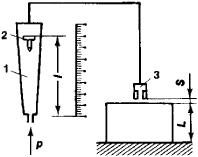 Figure 1. Direct-reading pneumatic gauge: (1) tube to which compressed air at a constant pressure ρ is supplied; (2) bobber, which rises to a certain distance / from the zero mark; (3) measuring nozzle; (S) gap between measuring nozzle and the part being measured; (L.) dimension being measured

In manometer-type gauges (Figure 2) the compressed air at a constant pressure enters the operating chamber through an input nozzle and then passes to the measuring nozzle and through the gap to the atmosphere. The pressure in the chamber, which depends on the gap S, is measured by a manometer whose scale is calibrated in units of length. Manometer-type gauges may be of the high-pressure type (30–40 kilonewtons per sq m [kN/m2]) or the low-pressure type (5–10 kN/m2).

The advantages of pneumatic gauges are the relative simplicity of design, the possibility of contactless measurement while the surface being measured is being cleaned by an air jet, the large magnification during measurement (up to 10,000 times) and the resulting high accuracy, and the possibility of determining dimensions and errors of shape, adding and subtracting the measured values, obtaining information continuously, and making remote measurements. The disadvantages include the necessity of having clean air at a stable pressure, the inertia of the pneumatic system, and the variation of temperature in the measurement area.

The development of designs in which the advantages of the pneumatic method are combined with the use of inductive and other transducers is promising.