devices for the detection, analysis, production, or conversion of polarized optical radiation, or light; also devices used for various investigations and measurements based on the phenomenon of light polarization. The first of the two categories into which polarizaton devices are divided includes simple devices for the production and conversion of polarized light—for example, linear and circular polarizers, phase plates, optical compensators, and depolarizers. The second category of polarization devices comprises more complex structures and equipment for quantitative optical polarization investigations. The components of such devices include polarization devices of the first category, light detectors, monochromators, and auxiliary electronic devices.

Simple polarization devices. One of three physical phenomena is made use of in a polarizer to obtain completely or partially polarized light: (1) polarization on reflection or refraction of light at the interface of two transparent media; (2) linear dichro-ism, which is a form of pleochroism; or (3) double refraction. The light reflected from a surface separating two media with different refractive indexes n is always partially polarized. But if a light ray is incident on the interface at an angle whose tangent is equal to the relative n — that is, the ratio of the absolute n’s —of the second and first media, then, according to Brewster’s law, the reflected ray is completely polarized. The disadvantages of a reflecting polarizer are the low reflection coefficient and the strong dependence of the degree of polarization p on the angle of incidence and the wavelength of the light. The refracted ray is also partially polarized; its p increases monotonically with increasing angle of incidence. If light is transmitted successively through several transparent plane-parallel plates, the p of the transmitted light can attain a considerable magnitude.

Media that are optically anisotropic absorb rays of different polarizations differently. In particular, in the spectral regions of intrinsic and impurity absorption bands, doubly refracting media exhibit linear dichroism—that is, they absorb ordinary and extraordinary rays differently. If the thickness of a plate cut from an anisotropic crystal (with absorption bands in the required region of the spectrum) parallel to the crystal’s optic axis is sufficient for one of the rays to be absorbed almost entirely, then light transmitted through the plate will be completely polarized. Such polarizers are said to be dichroic. Dichroic polarizers also include sheet polarizers, or polaroid, whose absorbing substance may be either crystalline or noncrystalline. Sheet polarizers have several important advantages: compactness; a large working aperture, which is the maximum angle of a converging or diverging incident beam for which the transmitted light is still completely polarized; and the almost total absence of size limitations.

Polarizers whose action is based on the phenomenon of double refraction are described in detail in POLARIZING PRISM. Their apertures are smaller than those of sheet polarizers, but their size, weight, and cost are greater. They nonetheless are irreplaceable in the ultraviolet region and in work involving powerful fluxes of optical radiation.

Plates that are made of optically anisotropic materials and that introduce a phase shift between the two mutually perpendicular components—corresponding to the two linear polarizations—of the electric vector E of the radiation transmitted through them are called phase, or wave, plates. They are used to change the state of polarization of the radiation. Thus, a circular or elliptical polarizer is usually a combination of a linear polarizer and a phase plate. A phase plate that introduces a phase shift of 90 is called a quarter-wave plate and is used to obtain circularly polarized light. Doubly refracting phase plates are made both from materials with natural optical anisotropy, such as crystals, and from substances whose anisotropy is induced by an external agent—for example, by an electric field or mechanical stress. Reflecting phase plates are also used; an example is the Fresnel rhomb (Figure 1). Their operating principle is based on the change in the state of polarization of light upon total internal reflection. The almost complete absence of a dependence of the phase shift on the wavelength is an advantage of reflecting phase plates over doubly refracting polarizers.

Figure 1. A Fresnel rhomb cut from optical glass. When a light ray that is linearly polarized at an angle of 45° to the plane of incidence is incident almost normally, the components of the ray that are linearly polarized parallel and perpendicular to this plane acquire a phase difference of one-eighth the period of the light wave upon each of the two total internal reflections. The total phase difference of a quarter period (90°) yields a circularly polarized ray.

All polarizers, be they linear, circular, or elliptical, can, of course, be used as polarizers in the strict sense of the word—that is, they can be used to obtain light with a required polarization. They can also, however, be used as analyzers, which analyze the state of polarization of light. The analysis of elliptically polarized light is carried out by means of path-difference compensators, a simple example of which is the quarter-wave plate mentioned above. A problem that frequently arises is the depolarization of partially polarized radiation. This problem is usually not solved by true depolarization, which is an extremely complex undertaking, but is reduced to the creation of a fine spatial, spectral, or temporal polarization structure for the light beam.

Devices for optical polarization investigations. Devices for optical polarization investigations are distinguished by an extraordinary diversity of spheres of application, structural design, and operating principles. They are used for photometric and pyrometric measurements, crystal-optical research, and the study of mechanical stresses in structures by means of photoelas-ticity. They also find application in, for example, microscopy, polarimetry, saccharimetry, high-speed still and motion-picture photography, geodetic devices, optical detection and ranging systems, optical communication systems, control circuits for lasers, and physical investigations of the electronic structure of atoms, molecules, and solids. Separate articles in the encyclopedia are devoted to the description of many of these devices. For this reason, only a brief survey of some of the main classes of these devices is presented below.

A system consisting of a linear polarizer and an analyzer that are aligned on a common axis is an element of most polarization devices. If the planes of polarization of the polarizer and analyzer are mutually perpendicular, the system does not transmit light (the extinction setting). If the angle between these planes is changed, the intensity of the light transmitted through the system changes in accordance with the Malus law—that is, the intensity is proportional to the square of the cosine of the angle. The convenience of this system for comparing and measuring the intensities of light fluxes accounts for its preferred use in photometric polarization devices, such as photometers and spectrophotometers using either visual or photoelectric recording. Polarization devices are the main elements of equipment used, for example, in crystal-optical investigations of media that have natural or induced optical anisotropy. Such investigations make extensive use of polarizing microscopes, which permit conclusions based on visual observations to be drawn regarding the character and magnitude of the optical anisotropy of a substance. Automatic photoelectric recording devices are used for precision analysis of optical anisotropy and of the dependence of the anisotropy on radiation wavelength. The quantitative analysis of anisotropy almost always requires that the optical properties of the medium be compared for two orthogonal polarizations. These polarizations are linear if linear dichroism or linear double refraction is being measured and circular when circular dichroism or the rotation of the plane of polarization is being measured. This comparison is carried out in the electronic circuitry of the device at a frequency sufficiently high for convenient signal amplification and noise suppression. Polarization devices designed for this purpose therefore often include a polarization modulator. 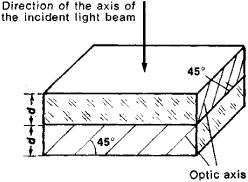 Figure 2. The Savart polariscope consists of two plates of crystalline quartz that are cemented together and of an analyzer that is rigidly joined to the Savart plate. The two quartz plates are of identical thickness d and are cut so that their optic axes form angles of 45° with the axis of the polariscope; the plane of polarization of the analyzer is directed at 45° to the principal sections of the Savart plate. Only the Savart plate is illustrated in the figure. When partially polarized light is incident, interference fringes are observed in the field of view. In the case of completely unpolarized light, the fringes are absent, regardless of the orientation of the polariscope.

this rotation. Saccharimeters, which are devices for the measurement of the content of sugars and some other optically active substances in solutions, are relatively simple polarization devices that are of great practical importance.