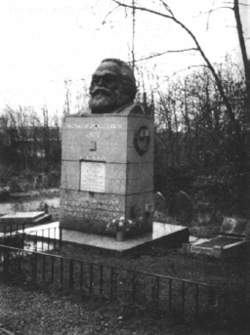 Karl Marx, who is thought of as the first “political vampire,” is buried, appropriately enough, in London’s vampire-infested Highgate Cemetery.

The description of a vampire as a creature who attacks people and saps their life’s blood easily lends itself to various metaphorical extensions. Some of the most popular have been in the political realm in which governments and other powerful social structures have been seen as vampires sucking the life out of people over whom they rule or have some control. This political and economic usage of vampires and vampirism was obscured by the dominance of psychological interpretations of vampirism, which directed attention to the personal psychological forces operating in vampire accounts. However, the political element inherent in vampirism has also been recognized almost from the entrance of the word “vampire” into Western Europe.

Shortly after the introduction of the word “vampire” in an English publication in 1732, (an account of the investigation of Arnold Paul in Serbia), The Gentleman’s Magazine of May 1832 carried a satirical article treating the Paul story as a metaphor of appalling social conditions. A decade later, a more serious utilization of the vampire as a political metaphor occurred in Observations on the Revolution of 1688 (written in 1688, but published in 1741), which noted:

Our Merchants indeed, bring money into their country, but it is said, there is another Set of Men amongst us who have as great an Address in sending out again to foreign Countries without any returns for it, which defeats the Industry of the Merchant. These are the Vampires of the Publick, and Riflers of the Kingdom.

A few years later, in 1764 Voltaire, in his Philosophical Dictionary, writing in response to the many vampires reported to exist in Eastern Europe, sarcastically responded:

We never heard a word of vampires in London, nor even Paris. I confess that in both these cities there are stock-jobbers, brokers, and men of business, who sucked the blood of the people in broad daylight; but they were not dead, though corrupted. These true suckers lived not in cemeteries, but in very agreeable palaces.

Communism and the Vampire: The most famous use of the vampire image in political rhetoric came in the nineteenth century in the writings of Karl Marx. Marx borrowed the image from his colleague Frederick Engels, who had made a passing reference to the “vampire property-holding” class in The Condition of the Working Class in England. Marx commandeered the image and turned it into an integral element of his condemnation of the bourgeoisie (middle class). The bourgeoisie supported the capitalist system—the very system that had it in its grip.

Thus Marx could speak of British industry as vampire-like, living by sucking blood, or the French middle class stealing the life of the peasant. In France the system had “become a vampire that sucks out its the peasant’s blood and brains and throws them to the alchemist’s cauldron of capital.” As Chris Baldick noted, for Marx, the essential vampiric relationship was between capital and labor. Capital sucks the life out of living labor and changed it into things of value, such as commodities. He contrasted living labor (the working class) with dead labor (raw products and machinery). Living labor was sentenced to be ruled by the “dead” products of its past work.

These products did not serve living labor, but living labor served the products it had created. Its service provided the means to obtain the products (which made up the wealth of the middle and upper class). Very early in Capital Marx stated, “Capital is dead labour which, vampirelike, lives only by sucking living labour, and lives the more, the more labour it sucks.”

Dracula and Xenophobia: Recent comment on the novel Dracula, especially that of Stephen D. Arata, emphasized the social comment Bram Stoker more or less consciously embedded in his novel. Dracula, like other British novels of the period, expressed the fear that had developed as the British Empire declined: as the civilized world declined, Great Britain, and by extension Western Europe and North America, were under the threat of reverse colonization from the earth’s “primitive” outposts. Stoker was well known for placing his gothic setting at a distant place, rather than pushing his storyline into the distant past. In the person of Dracula, he brought the wild unknown of the East, of Transylvania, to contemporary London.

Arata convincingly argued that Stoker held Transylvania as a fresh and appropriate symbol of the strife believed to be inherent in the interaction of the races of Eastern Europe and the Middle East. Dracula was not like Lord Ruthven or Carmilla—merely another decadent member of displaced royalty. He was a warrior in a land that pitted warriors against each other as a matter of course. His intentions were always domination and conquest. The coming of vampirism could bring the racial heterogeneity (and the racial strife inherent within it) to Great Britain. After figuring out what Dracula was and what he intended by his purchase of property in London, Jonathan Harker lamented his role in introducing Dracula to the city’s teeming millions. He would conquer the land and foul the blood of the British race; the threat to the body was also a threat to the body politic.

The central problem for Stoker was a form of Victorian racism and the threatened pollution that the savage races, represented by the figure of Dracula, brought. After Dracula bit Mina Murray, she became “unclean.” The boxes of foreign earth he brought to England had to be “sanitized.” The untouchable Dracula was also sexually virile, capable of making any number of offspring, while British men by contrast were unproductive. Unlike the mothers, the fathers of the major characters were not mentioned, the only exception being Arthur Holmwood‘s father, who died during the course of the novel. Only at the end, after Dracula was killed, did Harker symbolize the father of a new generation with a pure racial heritage.

The Contemporary Vampire: Throughout the twentieth century, the vampire has become a stock image utilized internationally by political cartoonists and commen tators to describe the objects of their hostile political commentary. In recent decades, war, fascism, and even the country of Ghana have been labeled as vampiric entities. One recent vivid example of such usage of the vampire metaphor appeared in the wake of the fall of Communism in Russia and Eastern Europe at the end of the 1980s and the proclamation by then U.S. President George Bush of a “New World Order.”

This term had previously entered the language through its use by a wide variety of political utopians from which it had acquired a number of controversial connotations. It sparked a variety of negative comment. The most virulent of the opposition, claiming that a New World Order amounts to the arrival of a world government, organized the Police Against the New World Order and launched Operation Vampire Killer 2000. Its program consists of a step-by-step plan to inform police, the military, and other law enforcement units about the New World Order and thus prevent their cooperation with it.